The management of the Demerara Harbour Bridge Corporation (DHBC) is apologising to commuters for the extended opening of the bridge yesterday. People travelling to West Demerara were affected. Long lines of traffic also affected people travelling along the East Bank of Demerara. 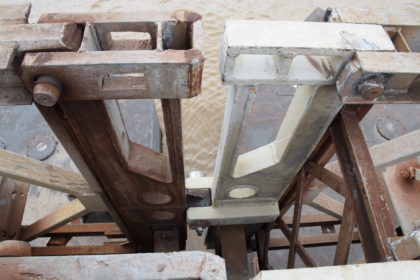 The post at Span 37/38 of the Demerara Harbour Bridge which needed repairs.

Maintenance Engineer, DHBC, Christopher Grannum, said routine maintenance was being carried out when they realized that extended work was needed. This resulted in the maintenance taking longer than scheduled.

“Due to the critical nature of the work we carried out yesterday, we encountered some difficulties and we would like to apologise for the problems on the East Bank Road but it was regular maintenance work that escalated to critical works,” Grannum explained.

The Maintenance Engineer noted that when an inspection was carried out on Wednesday, it was reaslised that work had to be carried out to prevent a section of the bridge from collapsing.

An additional welding team was called in to complete the works. He added that if this was not done, it would have resulted in the bridge being out of operation for days. 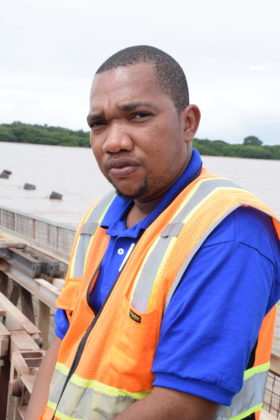 “We found that the post at Span 37 and 38 of the bridge was damaged. It had various problems. The eyes of the post were enlarged and it had

a crack so we had to change it due to the severity of the situation. While changing the post yesterday we encountered some difficulties in extracting and installing the post so that’s why we went over the time limit,” Grannum underlined.

Meanwhile, the night retraction which restarted last November is expected to reduce the amount of traffic on the bridge during peak periods. This would result in less maintenance.

Grannum said it is too soon to determine whether the night retractions would have actually resulted in a decrease in traffic at peak period. He said efforts are intensifying to ensure that the traffic is reduced to decrease the amount of retractions and maintenance,

In December 2015 the government received expressions of interest for the undertaking of a feasibility study and design of a new bridge across the Demerara River from 23 companies.

Minister within the Ministry of Public Infrastructure, Annette Ferguson revealed that during the first six months in 2017, the final study on a new Bridge will be completed by the Lievense CSO, an engineering firm from the Netherlands. Thereafter, the tender process for the construction of a new bridge will commence.