A meeting with the  staff of the East Bank Demerara Regional hospital, commonly known as the Diamond Diagnostic Centre will see issues faced by the staff are likely to be addressed in the shortest possible time. Minister within the Ministry of Public Health, Dr. Karen Cummings spoke with the Department of Public Information(DPI) outlining some resolutions that were agreed upon following a meeting on Wednesday with hospital staff 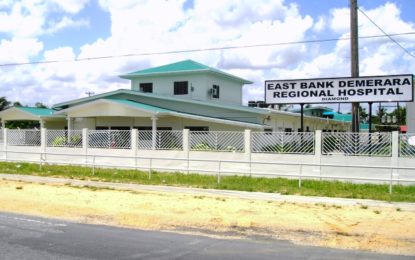 The Regional Executive Officer of Region Four, Pauline Lucas along with other representatives from the Regional Health Services department of Ministry of Public Health were appraised of the many issues that affect daily operations of the health facility. Issues raised were related to security, a non-functioning sewerage system and electrical issues.

As it relates to these specific issues, the team that met with the staff agreed that the regional administration will liaise with the commander of the ‘A’ Division of the Guyana Police Force to provide an on-duty officer at nights. This is to ensure a greater level of security for the staff working the night shift.

With regards to the non-functional sewerage system, the region will contract a waste management firm to conduct an analysis on the facility’s system and seek to rectify all faults.

Additionally, Minister Cummings said that electrical issues persisted because the initial installation of electrical wiring was poorly done. This resulted in a poor electrical supply to various sections of the facility. The entire building is to undergo rewiring to provide a more efficient electricity supply.

The minister added that with these resolutions, a follow up is expected conducted by October 6, 2017. It is hoped that these and other minor issues which have been occurring at the Diamond Hospital are addressed.

Minister Cummings further explained that although maintenance of the health facility falls under Region Four’s RDC budget, her ministry will most likely play a significant role in ensuring these issues are addressed.

According to Minister Cummings, “these issues are low hanging fruits and could be dealt with as soon as possible.” Based on the minister’s explanation, the staff of the Diamond hospital wanted to “down tools” since they have been voicing their concerns for some time now.

The main concern of the Ministry of Public Health is to ensure that patients and staff are treated with care and respect at all health facilities throughout Guyana. Therefore, the necessary systems should be in place to ensure that health services are provided in an unhindered manner.