Through a multi-collaborative effort from donors, the Georgetown Public Hospital Corporation (GPHC) received endoscopic equipment today that will help to screen and diagnose a number of digestive tract abnormalities.

Doctors will recommend an endoscopy procedure to identify ulcers in the stomach, gastritis, digestive tract bleeding, chronic constipation, and colon cancer among other digestive tract infections. 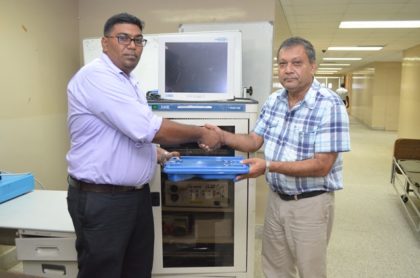 Senior Surgical Registrar and Surgeon of the GPHC, Dr. Ravi Motilall who handed over the equipment to the hospital on behalf of the donors, said the apparatus would actually allow the hospital’s staff to make diagnoses and be able to treat them properly. “This is something that the hospital has been struggling with, (not) making those diagnoses because we have lacked those equipment,” Dr. Motilall stated.

Dr. Motilall further stated that failure to actually diagnose these cases, especially those with digestive tract bleeding, would result in patients dying, if not properly screened and diagnosed.

Endoscopy is a nonsurgical procedure used to examine a person’s digestive tract. Using an endoscope, a flexible tube with a light and camera attached to it, a doctor can view images of a person’s digestive tract on a colour TV monitor. During this procedure, an endoscope is passed through the mouth into the throat then through the esophagus allowing the doctor to examine the stomach and intestines. 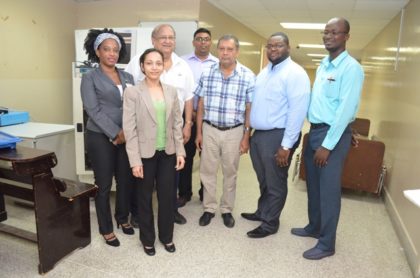 Dr. Motilall also pointed out that over the past few months he has seen a growing number of reported colon cancer cases. The surgeon said they (doctors) might be missing the early signs due to not having the necessary equipment to make  early diagnoses.

There to receive the equipment were representatives of the GPHC including, Chief Executive Officer, Michael Khan who said, “We appreciate the efforts of Dr. Motilall. His effort at the hospital is only the receiving end, it didn’t cost us any money. I express my thanks to the donors he was able to contact, and on behalf of the board and management of the corporation.”

Chairman of the Board of Directors, GPHC, Dr. Carl Max Hanoman also expressed his gratitude saying that, “It’s always good to be on the receiving end of such expensive equipment, it’s about time the Georgetown Hospital is on par with the private hospitals. Georgetown Hospital is the people’s hospital, and is a hospital for poor people so these facilities will be available to the poor people of this country.”

The endoscopic equipment was transferred to the surgical unit of the GPHC for immediate use.