Dozens of Region Nine residents to benefit from NDIA interventions

Hundreds of residents of Massara, Aranaputa, Rupertee, Annai Central and surrounding Region Nine communities are set to benefit from a $30M intervention by the National Drainage and Irrigation Authority (NDIA). 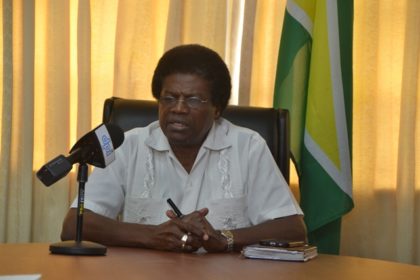 Chief Executive Officer of the Drainage Authority (NDIA), Frederick Flatts, in an exclusive interview told the Department of Public Information (DPI), “for the first time in the history of the NDIA, there is now a resident engineer and equipment stationed in the hinterland district.”

Asked to detail the works taking place, Flatts said, “In Masara, we have been digging a large lake for them, in which the community will be able to rear fish, something they really wanted for decades.”

The works, which have been delayed by recent floods in the hinterlands, is almost 80% complete.

Through the Ministry of Agriculture, Government’s focus is aimed at encouraging diversification of food production in the Hinterlands while developing it as Guyana’s new agricultural frontier.