Georgetown, Guyana – (October 1, 2018) The drilling of eight wells, in eight villages in the South Rupununi, Upper Takutu- Upper Essequibo (Region Nine) by the Brazilian Army under its 6th Battalion Engineering Corps, has the potential to bring unprecedented relief to the residents of the Region, Minister of State Joseph Harmon said today.

Minister Harmon was at the time delivering the feature address at a simple welcome ceremony held at the Lethem Amerindian Hostel for the Brazilian team. The Minister of State said the project’s significance should not be understated or underestimated as it will meaningfully improve the lives and livelihoods of residents in the targeted communities.

“We are here in the midst of what I call an ongoing process, whose magnitude and benefits to the Upper Takutu – Upper Essequibo and Guyana should not be underestimated. I cannot emphasise enough the significance of this project, not just in terms of the benefit to the people of the region but as its occurring within the context of Guyana marking 50 years of formal diplomatic relations with Brazil. This project has the potential to bring unprecedented relief to the citizens of Region Nine and it is part of the fulfilment of Government’s pledge to bring a good life to all the people of Guyana,” said Minister Harmon. 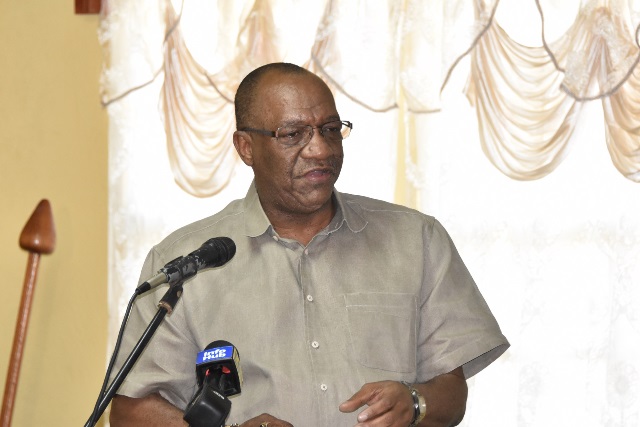 Minister of State, Mr. Joseph Harmon delivers the feature address at the welcome ceremony held for members of the Brazilian Army’s 6th Battalion Engineering Corps, at the Lethem Amerindian Hostel. 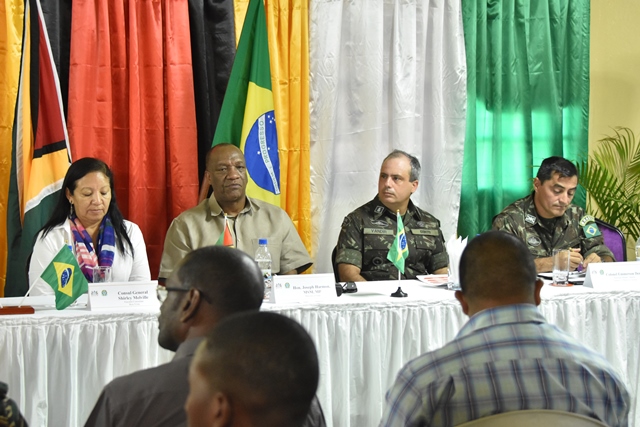 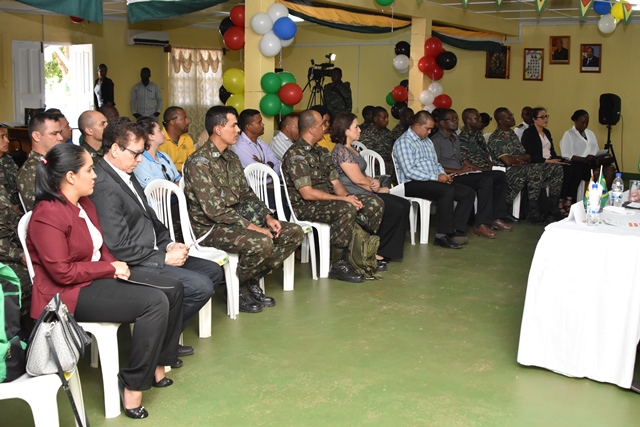 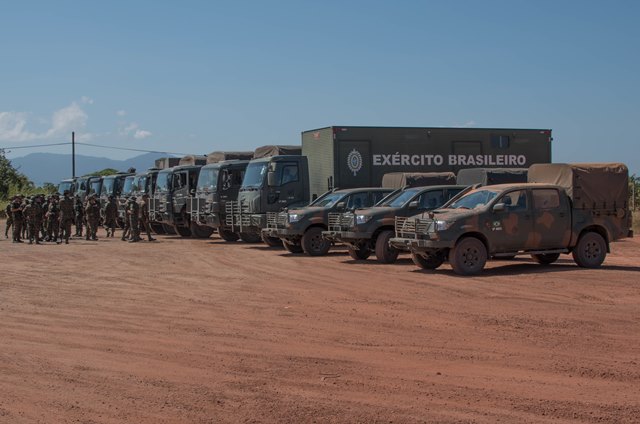 The second batch of the Brazilian vehicles, which arrived in Lethem this morning. 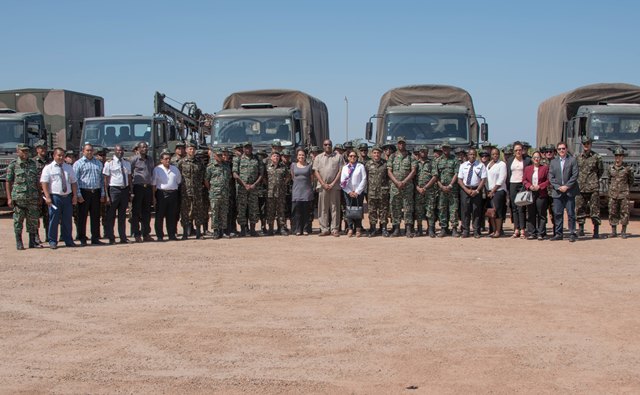 Minister of State, Mr. Joseph Harmon and Consul-General of Guyana to Boa Vista, Brazil, Ms. Shirley Melville (center) with members of the Brazilian Army’s 6th Battalion Engineering Corps, Guyana Defence Force, the Ministry of Foreign Affairs and the Ministry of Citizenship at the Lethem-Brazil Immigration Office, this morning. 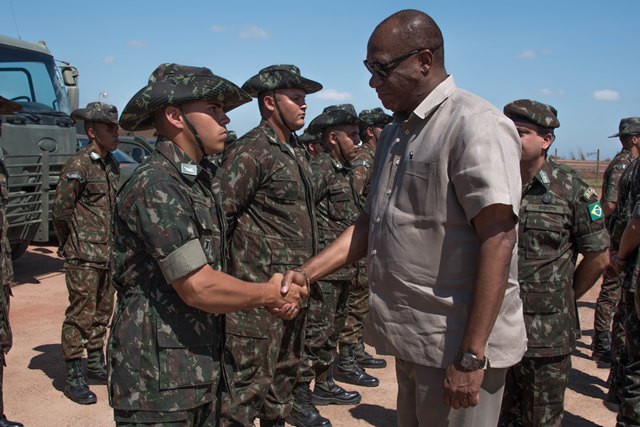 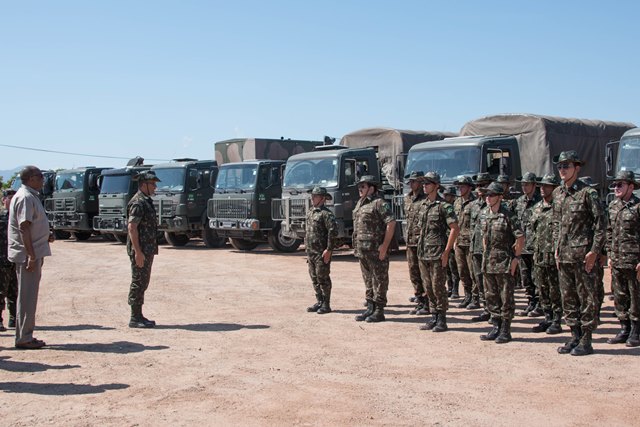 Minister of State, Mr. Joseph Harmon takes the salute from the Brazilian team at the Guyana-Brazil crossing, earlier today.

The Minister of State noted too the importance of knowledge transfer and capacity building of Guyanese in the area of well drilling techniques. He said soon Guyana will be in a better position to drill its own wells, not only at the technical level but more importantly, at the community level.

“This is significant because our community members are the first responders and this project is an excellent model of inter-agency collaboration which is a demonstration of an efficient Government. I want to say that the friendship, which exists between our two countries would be further cemented by the work which you would be doing here in the South Rupununi,” the Minister expressed.  The drilling of artesian wells will take place in the villages of Aishalton, Chukrikednau, Shea, Maruranawa, Awaruwaunau, Karaudanawa, Achiwib and Bashraidrun.

Minister Harmon noted that the Agreement between the Co-operative Republic of Guyana and the Federative Republic of Brazil allows for the use of technologies to reduce the impact of droughts in Region Nine was given the green light at the highest levels in both countries and is a clear signal of the strong friendship between the two nations.

“Guyana and Brazil are cooperating within the Union of South American Nations (UNASUR), Community of Latin American and Caribbean States (CELAC) the Common Market of the South (MERCOSUR) and the Organisation of American States (OAS) to preserve Latin America and the Caribbean as a zone of peace.  Our relations has witnessed cooperation in defence, agriculture, energy, health, infrastructure, security, sport, trade, transportation and water. Above all, Guyana continues to be reassured of Brazil’s support on the Guyana Venezuela Border Controversy,” the Minister of State stated.

Director-General of the Civil Defence Commission (CDC), which is the coordinating agency; Lieutenant Colonel Kester Craig said Guyana has embraced the concept of comprehensive disaster risk management while pointing to climate change and the effects thereof.

“The central focus of which is to place greater emphasis on the impacts of climate change, to  incorporate more prevention and mitigation measures and to inculcate its components into the national risk management agenda. This project apart from providing potable water to residents is an effective risk reduction initiative aimed at minimising the effects of droughts as experienced annually in the targeted communities,” Craig stated.

Meanwhile, Regional Chairman, Mr. Bryan Allicock said the digging of the eight wells across the South Rupununi will result in tremendous relief being given to the residents who have suffered from El Niño. The Regional Administration as well as residents, Allicock stated are pleased with the execution of the project.

“I am very pleased and it shows that we have good neighbours. We are very, very happy that our neighbours have put a lending hand and not just drilling wells but also passing on the knowledge. We must thank the Brazilians in honouring this request for this region because our farmers and ranchers suffer every year during the dry season,” Mr. Allicock stated.

Brazilian Military Attaché at the Brazilian Embassy in Georgetown, Colonel Emmerson Deni, said he is happy that the project is being executed at a time when the two countries (Guyana and Brazil) are celebrating half a century of strong bilateral ties.

Colonel Deni noted that during the drilling phase, there will be technology transfer and capacity building, which will benefit several agencies including the Guyana Defence Force (GDF), the Guyana Water Incorporated (GWI), the Hydro-meteorological Office (HydroMet), Ministry of Public Infrastructure as well as representatives from the eight villages. The Guyanese team will be drilling the last two wells under the supervision of the Brazilians.

Additionally, Mayor of Lethem, Mr. Kerry Jarvis stressed the need to implement sustainable mechanisms, which can address the situation of droughts in the Region.

“Water is life and while we are the land of many waters, there is still a difficulty in accessing this resource at different times in different areas. There is a need to have water to sustain our farmlands during the dry weather since not all farms are located next to rivers. We not only have to think about the farms but persons who rear cattle since these animals need to have access to water. When I heard about this project, I was pleased to be part of the initiative. This shows that our ties and collaborative efforts are being strengthen. The Town Council is grateful and pledges our support,” Jarvis stated.

It is the intention of the Brazilian team to have the wells handed over to the Guyanese authorities on November 28, 2018. The project follows President David Granger’s State visit to Brazil in December 2017, where the Complementary Agreement to the Basic Agreement on Technical Cooperation between the Government of the Co-operative Republic of Guyana and the Federative Republic of Brazil for the

Implementation of the Project Technologies to Reduce the Effects of the Drought in Region Nine was inked.

The Complementary Agreement states that the Government of Brazil shall undertake to “promote the transfer of Brazilian knowledge and experience related to mitigation of the effects of drought; provide the means for implementation of activities foreseen in the Project, send consultants and experts to implement activities to be carried out in Guyana, support the development of the Guyanese technical team’s capacity to drill artesian wells and monitor and evaluate Project implementation.”

Meanwhile, the Government of Guyana, as prescribed in the Agreement, shall undertake to “take responsibility for the maintenance of the artesian wells that will be drilled during the practical operations on the ground; appoint a technical team to monitor and participate in activities to be implemented, provide the technical team sent by the Government of Federative Republic of Brazil with the logistical support required to implement activities of their responsibility and to take measures to ensure that activities implemented by professionals sent by the Brazilian Government will be continued by professionals from the Guyanese implementing institution.”