−To serve as maternity waiting home, accommodation +for healthcare staff on training

A new building has been commissioned at the Suddie Hospital, Region Two  (Pomeroon-Supenaam) to house expecting mothers and medical staff.

The lower flat of the two-storey building has the capacity for 16 beds and includes living room, kitchen and bathroom facilities for the maternity cases under observation.

The hospital’s acting Medical Superintendent, Dr. Sheneer Reid, said the facility would play an integral role in ensuring that maternity cases for riverine communities are monitored to ensure safer deliveries. 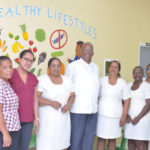 Minister Jordan and some of the nurses 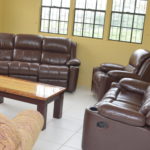 The living room in the maternity waiting home

“We weren’t able to monitor our far end mothers because sometimes we had to discharge them and they’d go home and be monitored by healthcare workers who aren’t capable of managing PIH [Pregnancy-Induced Hypertension] mothers or mothers who are at risk of some complication during delivery so we could have a closer eye on them here.” Dr. Reid said.

The expecting mothers were previously were housed at the nearby Amerindian hostel.

Meanwhile, the upper flat of the building has nine self-contained rooms to be utilised by medical staff from far-flung communities in the region who may be undergoing training or visiting for other purposes.

Minister of Finance, the Hon. Winston Jordan commissioned the building during a recent visit to the region. The project was started by the regional administration in 2017 and completed with furnishing and other finishes this year with support from central government.