During a recent site visit, Minister of Public Infrastructure, David Patterson, told media operatives that the Ministry has managed to make significant progress since its assumption of the project in late April. 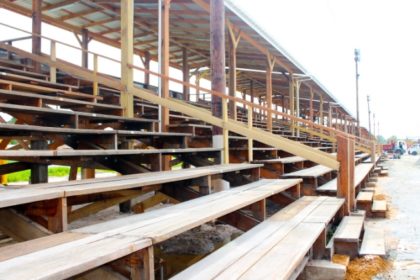 When the Ministry assumed responsibility of the project, six areas of focus were established for completion in a period of three weeks. These were, roofing and remedial works for spectator bleachers; completion of superstructure, walls and roof for VIP stand; electrical wiring, lighting and power supply; access driveways and bridges; creation of sanitary facilities; and drainage works.

These works were slated to be completed this week and, according to Minister Patterson, the timetable remains the same. He shared that the goal is to have the site ready to be handed over to the National Commemorative Committee by this weekend for further preparations for the Jubilee celebrations.

“A tremendous amount of work has been done and will continue to be done,” Minister Patterson said. He further stressed that heavy emphasis was placed on the safety of all the installed facilities and Chief Works Officer, Mr. Geoffrey Vaughn, indicated that the factor of safety was improved from about 2.2 to 3.0.

Minister Patterson also said that contractors have been very cooperative and he commended them for working assiduously despite poor weather.  “Everyone has really chipped in to make this project come together,” he said.

Thus far, at least 96 percent of works on the stands and bleachers have been completed, with all stands being outfitted with roofing. For the VIP stand, progress has been recorded at about 73 percent, while the Ministry’s Special Projects Unit, which is responsible for the project’s road works, has achieved about 90 percent completion.

At least 400 persons are working on the project to see it completed in time for the Jubilee celebrations later this month. 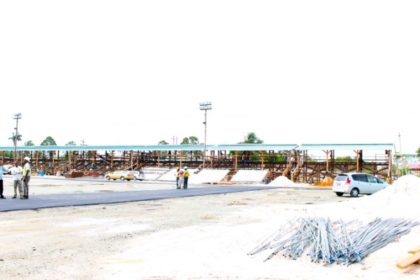