The E-Government unit is the engine of the Ministry of Public Telecommunications, and is now the basis for inter-connecting Government Ministries and agencies.

Minister of Public Telecommunications Catherine Hughes, expressed these sentiments as she made her presentation in the National Assembly during the on-going National Budget Debates.

Minister Hughes said the Government has reviewed, repaired and consolidated the E-Government Network constituting the Fibre Optic backbone around Georgetown with a Long-Term Evolution (LTE) network spanning from Charity to Springlands.

The Minister said that this network was first established in 2012, but only became operational last year by this  Government.

“The Government has connected and provided secure, controlled internet access to over 140 locations,” Minister Hughes said. 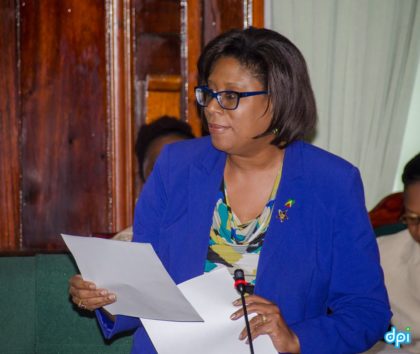 “We are conducting assessments to determine, through an evidence-based approach, the real and emergent needs of these communities and building the capacity to meet them.  And by so doing, we are bridging the digital divide and empowering our citizens to participate in the digital society,” the Minister said.

The Public Telecommunications Minister said that his Excellency, David Granger re-conceptualised and developed a modern project in the form of the One Laptop per Teacher programme. She noted that over 8,202 laptops have been distributed to teachers across all 10 Regions.

The Minister noted that the goal of this approach is to improve digital access and learning and is complemented by Government’s initiative to install high-speed internet access in all secondary schools and institutions of higher learning.

“Teachers all across Guyana now own their laptops that were pre-loaded with marking schemes, e-textbooks with links to research materials, teaching aids for Math and Science, and much more,” the Minister explained.

The Ministry has overcome a major hurdle in terms of salvaging the E-Government Network, more specifically the fiber optic link from Lethem to Georgetown which “was decommissioned at a loss of over $1.3 billion of tax payers’ dollars.” This must be placed squarely at the feet of the past PPP government as the  possibility of repairs proved impossible and fund for this purpose in our 2016 budget went unused,” Minister Hughes noted.

For 2017, Government will assertively pursue the development of a Guyana ICT Platform that shall be manifested in the form of an ICT ecosystem.  Minister Hughes said the Ministry began to build on its operational capacity during 2016, recognising that a major priority was the creation of an open, liberalised telecommunication sector. “To this end, in July 2016, we laid before Parliament and passed the 2016 Telecommunication and amended Public Utility Commission Bills which have now been assented to. The passing of these bills established the framework and conditions under which our telecommunications sector will be liberalised,” the Minister said.

Minister Hughes said that as part of this framework, the Ministry completed eight sections as required by the new legislation and sent them out for public consultation and comment, while Electronic Transactions, Data Protection, and other relevant legislations are still to come on stream.

The liberalisation of the telecommunications sector, new frontiers of innovation and entrepreneurship will be opened, Minister Hughes told the House.

She noted that higher levels of academic achievement will be realised by enabling a level playing field for all Guyanese children and citizens pursuing academic and vocational personal and professional development.

The Minister added that new business models can now become a reality in Guyana, whereby citizens can join their counterparts around the world in developing new entrepreneurial and E-Commerce opportunities from the convenience of their homes.