Efforts to bring relief to the flood affected communities in the Mahaica/Mahaicony/ Abary, Region Five areas are continuing even as there are reports of rising water levels due to heavy rainfall over the last few days.

Speaking to the Government Information Agency (GINA) via telephone today, General Manager of the Mahaica/Mahaicony/Abary Agricultural Development Authority (MMA/ADA) Aubrey Charles reported that the pumps are working continuously to drain the land. 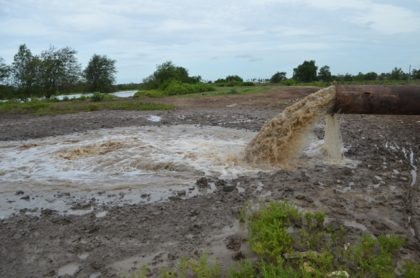 Water being drained by one of four mobile pumps at Trafalgar outfall, Region Five

According to acting Chief Executive Officer of the National Drainage and Irrigation Authority (NDIA), Frederick Flatts, there are currently three mobile pumps working. These have a combined capacity to drain approximately 1200 gallons of water per second. There are four tractor driven pumps draining the residential areas, and two excavators cleaning the canals and drains of debris.

Additionally two excavators were to be added to the fleet on Monday and a pontoon with two excavators are to be deployed this evening, to dredge the Trafalgar outfall channel once more.

Following the long dry spell and two inoperable fixed pumps, the Trafalgar outfall channel which was recently dredged, became silted up due to the absence of water in the channel. 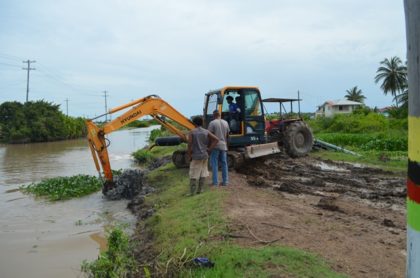 Charles, who was on the ground engaging farmers and affected residents today, explained that, “… we had some downpour of rain. I’m in the backdam with some farmers. Yes the water has risen in a couple of the villages so I’m out in the field here now at Litchfield going down in the backdam. The pumps can’t deal with the amount of water.”

Meanwhile, in an invited comment, Agriculture Minister, Noel Holder told GINA that the MMA/ADA has frontline responsibilities to respond to the situation, however, the NDIA is working along with the regional administration and the authority to install additional pumps in the affected areas. 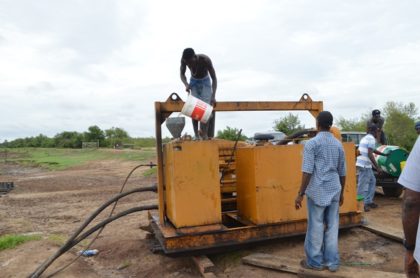 The Agriculture Minister further explained that the flooding in the Trafalgar/Union areas has been compounded with the non-working pumps which were vandalised some time ago.

The damaged pumps located at the Trafalgar pump station have a combined capacity to drain almost 3000 gallons of water per second.

The Ministry of Agriculture’s 2016 budget provides funding to fix one of these pumps and works are expected to commence soon in this regard.