(MOTP) Georgetown, Guyana – (September 15, 2016) President David Granger said that the agenda for Guyana’s development over the next four years requires significant investment from foreign sources, particularly as it relates to developing the green economy, improving infrastructure and reducing poverty by creating small and micro enterprises. As such, he said that Guyana welcomes the re-engagement with the European Investment Bank (EIB), whose officials he met with, earlier today. 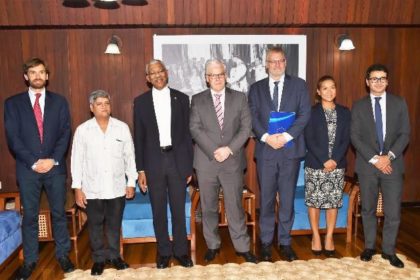 Minister within the Ministry of Finance, Mr. Jaipaul Sharma was also present at the meeting at the Ministry of the Presidency. The delegation, led by the Bank’s Vice President, Mr. Pin van Ballekom will be engaging with government officials and private sector entities over the next two days to discuss possible areas for partnership. “We very confident that the European Investment Bank is going to be an important vehicle to provide credit to enable the developments we need, to take place,” President Granger said.

With regard to the ‘green’ agenda, the President informed the team that while there is an existing financial arrangement between Guyana and Norway, the country has tremendous eco-tourism and biodiversity potential. Additionally, there are great prospects in the development of renewable energy sources such as hydropower, wind and solar. He also spoke of the need for access to financing for for small and medium-scale enterprises development.

“We need to diversify, but we have not been able to do so as rapidly as we need to… We need to have a strategy, which is broad-based that deals with our existing resources,” he said.

Meanwhile, the Bank’s President said that based on the priority areas that President Granger has outlined, he is convinced that the EIB can be of value to Guyana. “We are looking into the possibilities and if it’s a good quality project and an interesting investment, then we will go ahead,” he said.

The Bank’s last transaction with Guyana, a micro-financing facility for small and medium-scale enterprises, was in the year 2000. The EIB is the largest multilateral public bank in the world and 10% of its lending targets investments outside of the European Union. It is owned directly by the 28 European Union member states.