The National Library today received eight computers from the Pele F.C. Alumni Corporation, an organisation from the United States of America (USA).

At the handing over ceremony at the National Library, Chief Librarian, Emiley King, said that, “this will be a great enhancement to our internet library and as many of our users would always tell us about the need to acquire additional computers and these are much welcomed.” 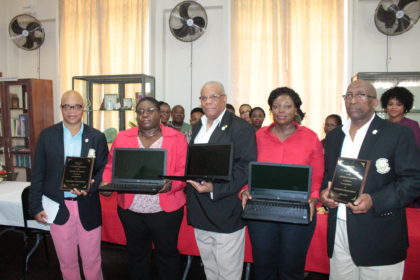 The librarian noted that on the weekends it’s every challenging for persons to use the systems since there are not enough computers, but with this donation the needs of the users will be enhanced.

“We are better able to better serve this sector in terms of the service of having technology available for our users,” King said, since the library is not only for reading books.

Denis Carrington, Chairman, Pele F.C.  Alumni Corporation said growing up in Guyana and wanting to play in the Albouystown football club, one of the requirements was that one had to be in school. Carrington explained that what motivated them to form the organisation even more was when they returned to Guyana and visited the club and found only four of the members were attending school. 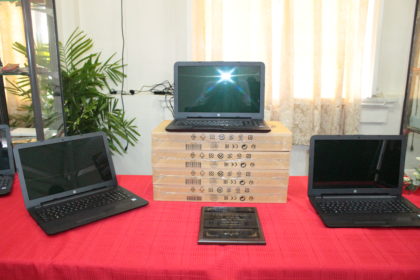 Computers on display that were handed over to the National Library

Pele F.C.  Alumni Corporation was formed in 2012 and has been supporting young people and youth groups in Guyana since then.  The organisation was created to respond to the needs of the youths of Guyana after much was not being done for them in the education sector. The Alumni Corporation has given more than 50 scholarships and  distributed school equipment and other sporting gear to young people and youth groups.

All of the organisation’s funding comes from the support of Guyanese and others living in the diaspora who wish to improve the lives of young people in Guyana.

The organisation is here this year to promote a youth programme which will be held at the Ministry of Education’s ground (GNS Ground) on Carifesta Avenue from April 18- 20, 2017. The programme this year caters to some 60 young people from around Georgetown and nearby areas with the aim of facilitating etiquette training sessions.

Pele F.C.  Alumni Corporation partners with the Ministry of Education on most if not all of their training programmes.