Eighty-eight young people, yesterday, graduated from the Youth Leadership Training Programme hosted at the Madewini Training Centre by the Office of the Presidential Advisor on Youth Empowerment. This is one in a series of programmes, which began last year and has seen over 200 young people being trained in practical leadership related skills as part of the current administration’s plan to provide young people with the necessary skills to tackle the challenges facing youth in the country.

Prime Minister Moses Nagamootoo presented the charge to the graduates and urged to use the time they have now to develop their skills to prepare themselves for Guyana’s oil and gas future.  “This country will be very rich as the new frontier of oil and gas. We have now become the one bright spot in the world where all eyes are looking, but we need not only to be rich but also to be safe and the only way our country can be safe and secure our riches is if we have dedicated leadership and you are the leaders. Time is moving very quickly and you have to be prepared for that leadership,” he said.

He also encouraged them to take the lessons they have learned and to put it into practise as they return to their communities. “This is an opportunity that will help you through in life. You must look forward to the best in relationships. You might have come from different communities with different political persuasions but when you say the national pledge; that has nothing to do with your political persuasion. It has to do with this individual, who decided that I must love my country, I must salute my flag and love my fellow citizen and do good. The ‘I’ is not the party. The ‘I’ is you; that powerful force that will make the country come together. [The future of the country] must be brought together so that we can develop our rich resources and we can become an envy of the world where we can be respected as citizens of the world and not for which race or nationality we come from,” the Prime Minister said.

Presidential Advisor on Youth Empowerment, Mr. Aubrey Norton, describing the programme, said that it features components that can help to mould responsible citizens. “What we have attempted to do is to put together the critical things that are necessary for them to begin the process of becoming leaders. It is my sincere hope that they will utilise the information, return to their communities [and] work with young people. We believe if young people are given leadership they will be valuable resources that will [contribute] to the benefit of Guyana,” he said.

The Youth Leadership Training Programme is divided into two Modules; Module One of the training features lessons in leadership skills, event planning, communications, effective public speaking, meeting procedures and organising youth organisations, while Module Two focuses on skills such as writing reports and minutes, the formulation and implementation of policy, how to conduct meetings as well as social psychology and team building exercises.

The participants hailed from Pomeroon-Supenaam (Region Two), Essequibo Islands-West Demerara (Region Three), Demerara-Mahaica (Region Four), Mahaica-Berbice (Region Five), East Berbice-Corentyne (Region Six), Cuyuni-Mazaruni (Region Seven), Potaro-Siparuni (Region Eight) and Upper Demerara-Berbice (Region 10). Some of the participants expressed how useful they found the components of the programme as well as their eagerness to be role models for the young people in their own communities.

Ms. Christine Chanderpaul, from Cove and John, East Coast Demerara, said that her community doesn’t currently have a youth group but she has been encouraged to start one having attended the training programme. “This programme has clarified a lot of things for me especially in public speaking and it is also important for learning how to be leaders. In my community there are lots of children not going to school regularly and I think that forming a youth group in my community would help them to become better leaders and teach them to go to school and can help to enhance our community as a whole,” she said.

Ms. Shoba Kamptapersaud from Black Push Polder, Berbice said that it is important for young people to develop their leadership skills in order to be good role models for other young people in their communities. “I learned to be a better leader in my community and how to help young people to achieve their goals and to encourage them to be the best that they can be,” she said.  Mr. Michael Sinclair, from Rose Hall said that he is very grateful to have been part of the programme and that he will take the lessons he learned throughout his professional life. “I learned the roles of leaders and what they are expected to do. It is a very good initiative… We should teach more young people to be better leaders because it is the younger generation that will lead the country in the future,” he said.

The event also featured cultural performances put on by the graduates including dances, poetry and musical renditions. Prime Minister Nagamootoo was also given a tour of the Madewini Training Centre. The Youth Leadership and Training Programmes fall in line with the fourth strategic area of the National Youth Policy of Guyana, which was adopted by the National Assembly in October last year.

Prime Minister Moses Nagamootoo and Presidential Advisor on Youth Empowerment, Mr. Aubrey Norton and other facilitators pose with the 88 graduates of the Youth Leadership Training Course

Twelve year old Fenny Adrian is the youngest graduate of the programme. He proudly receives his certificate from Mr. Ronald Austin, Senior Education and Training Officer at the Office of the Presidential Advisor on Youth Empowerment 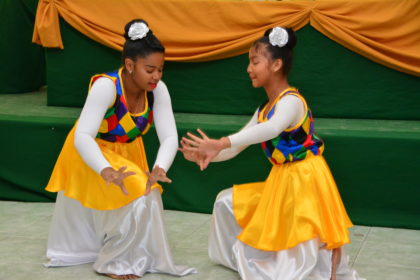