The European Union Election Observer Mission in Guyana has indicated that the March 2, 2020, General and Regional Election was well managed by the Guyana Elections Commission.

“The elections were competitive; contests could campaign freely and elections day was well managed by the administration.” 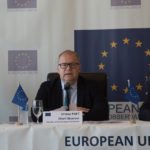 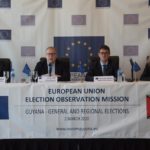 Paet stated that his group concentrated on the overall all process however, they will have a more detailed report when the process is completed.

The mission will release its official statement in two months and will include the mission’s observation and recommendation.

This is the largest EU EOM mission which comprised of 55 observers and was stationed at over two hundred polling stations across the country. It included a core team of nine analysts, 14 long term observers deployed to the ten administrative regions. Twenty short-term observers joined the team shortly before elections day.

The mission has been present in the country since January following an invitation by President David Granger to observe the electoral process. It is independent in its findings and conclusions and adheres to the Declaration of Principles for International Election Observation.