Embassy of Guyana, Washington, D.C., February 27, 2020 – On Saturday, February 22, 2020, Dr. Riyad Insanally, CCH, Ambassador of Guyana to the United States of America and Permanent Representative to the Organization of American States (OAS) and Staff of the Embassy of Guyana in Washington, DC, welcomed members of the Diplomatic Corps, members of various private sector bodies and scores of Guyanese nationals residing in the District of Columbia, Maryland and Virginia, to the Hall of the Americas, at OAS Headquarters in Washington, DC,  to celebrate Guyana’s 50th Republic Anniversary. 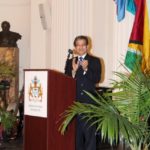 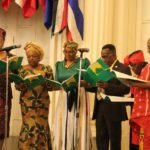 Ambassador Insanally, in his address, stated that the theme, Reflect, Celebrate, Transform, “could not be more appropriate given the juncture in our history as which we find ourselves” and that it “was a time for reflecting on how far or how little we have travelled as an independent nation and as a republic; on our collective achievements and our collective failings; on the process of finding our way in a not always friendly neighbourhood and world; and on where we are about to go, now that we are officially a petroleum-producing state.” In this respect, he reminded the gathering that even as Guyana celebrated 50 years as a Republic and, with the country on the cusp of a massive economic and social transformation, it was a time for the “renewal of efforts to build a more prosperous and equitable country”.

Ambassador Insanally also read a message from His Excellency David Arthur Granger, President of the Cooperative Republic of Guyana