Georgetown, Guyana — (October 17, 2018) Chairman of the Management Board of the e-Governance Academy (eGA) of Estonia, Dr. Arvo Ott, accompanied by Ms. Marit Lani and Mr. Tõnis Mäe, presented a draft report on the project, Digital Governance Roadmap for the Government of Guyana, during yesterday’s Cabinet meeting.  The draft roadmap outlines an implementation plan that will see the complete establishment of digital governance by 2030.

During an interview with the Ministry of the Presidency’s Public Information and Press Services Unit, Chairman of the National Data Management Authority (NDMA), Mr. Floyd Levi explained that the roadmap was drafted after an assessment of Guyana’s e-governance status and is meant as a guideline to shift Guyana into a more modern state. As Estonia is world renowned for its successful e-governance system, Mr. Levi said that a partnership with the eGA primes Guyana for an efficient and effective e-Government. 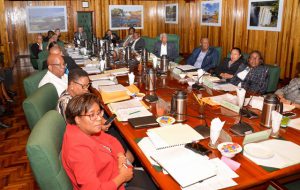 President David Granger and his Cabinet fully engaged as a delegation from the Estonian e-Governance Academy presents the draft report on the project, Digital Governance Roadmap for the Government of Guyana.

“There are several e-government initiatives undertaken by Government and we wanted to review that against a baseline.  We chose the country of Estonia, which has had a very successful e-government implementation.  We wanted to ensure that we were on the right track and using the e-Governance Academy of Estonia to review our work… as a starting point, we designed a roadmap that will clearly show what we need to have in place in order to get where we want to go,” he said.

The Chairman added that the Estonian delegation highlighted four key areas of development that will ensure Guyanese benefit fully from the e-governance: the integration of the population registry into the e-government framework, the establishment of unique digital identities for every citizen in Guyana, the development of a secure and seamless digital exchange to facilitate the sharing of information between Government agencies, and the listing of all available Government services that need connection to the secure Government information exchange.

Mr. Levi said that tackling these gaps in Guyana’s e-governance development will boost efficiency; whereby a citizen needs only share their information with a government agency one time.   “This is what we call the ‘once only’ principle.  A citizen is already known to Government and you should not be asked by different Government agencies for the same information every time you interact with them… The system will be able to verify that you are who you claim to be with the Government agency that is offering you service seamlessly [and] securely,” Mr. Levi explained.

Ambitiously, the NDMA chairman said Guyanese will benefit from online Government services as soon as next year.  “I believe citizens would be very satisfied if they can have all of their interactions with Government done online so we are aiming at this point in time, to have over 200 Government services be available to the citizens online by the end of 2019… You go online and you have this interaction, you complete your application and you send it into Government agencies from the comfort of your own home, from your own smartphone, and, if you do not have one, from the Government-initiated community ICT hub in your community,” the Chairman said.

“The Green State Development Strategy is Guyana’s blueprint for development.  It is not only an environmental blueprint.  It is a blueprint that this administration has advanced as its development framework for the entire country for all sectors of society… We have to compete and work in tandem with the other sectors of society toward the same goals… We are very synchronised with Government’s agenda,” he said.

In a determined effort to promote inclusivity and equality, Mr. Levi said that the department is actively reducing the occurrence of digital exclusion, especially for those living in Guyana’s hinterland.

“I know at this point in time [that] we’re very focused on the coast, but we are now moving on a project to get into the hinterland [and] to get those hinterland areas connected.  There are over 17 hinterland communities where we are providing services and citizens can use those existing facilities that we have developed and deployed to use those Government services when we bring them online… We take out the need for transportation, for moving [citizens] from their communities to get [Government] service done. [This] has an implied cost and, of course, the time it takes to get all of this done,” he said.

In closing, the Chairman encouraged Guyanese to embrace the coming technological advancements as they will significantly improve the quality of life for the people of Guyana.

“[Citizens] may be digitally disadvantaged because they cannot and do not have a physical device or the means to connect that device to the internet… We are saying that at the Ministry of Public Telecommunications, that all citizens must have the ability to access information and the internet whenever they need.  We see this almost as a human right, the right of all Guyanese to access digital services and the internet when needed.  I say to those digitally disadvantages citizens that Government is doing its part by providing these services in your community… Take advantage of these opportunities because they can have profound effects on [your] lives and livelihood… your lives can be better and certainly your livelihood can be improved when you take advantage of modern technologies,” he said.

Some of the planned interventions include eCabinet, ePolice, eHealth, eSchool, and eResidency.