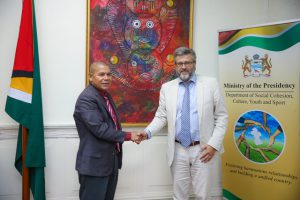 During the meeting, the Ambassador shared the EU’s plan to strengthen their continued cooperation with Guyana, especially in areas which encourage youth development. Minister Norton and Ambassador Ponz Cantó also discussed the possibility of increasing the support provided within the culture department, particularly for Guyana’s upcoming 50th Republic Anniversary.

They also spoke about the department’s current focus on developing sport in the country.

“The Government of Guyana has always believed that only through collaborative efforts between relevant stakeholders and officials can our citizens truly benefit from initiatives designed to either equip them with the necessary skills and knowledge or opportunities to achieve goals,” Minister Norton said.

Moving forward, the Social Cohesion Minister said the department will work closely with the Ambassador, to create a partnership which will benefit the young people.