The Forestry Training Centre Incorporated (FTCI) in collaboration with the Guyana Forestry Commission (GFC) recently met with stakeholders to bring a closure to the EU/FAO project titled “Develop a pilot timber harvesting and forest monitoring model for small loggers associations to improve compliance with the forest laws and agreed forest management prescriptions in Guyana”.

The Project was initially submitted by Upper Berbice Forests and Agricultural Producers Associations (UBFPA) to the European UnionForest Law Enforcement, Governance and Trade (EU-FLEGT) programme as a means building the capacity of three associations in the Upper Berbice River area in Forest Governance in order to test the Legality Assurance System of Guyana. The project was later revised based on discussions between the small loggers associations, Food and Agriculture Organisation (FAO), Guyana Forestry Commission (GFC) and Forestry Training Centre Incorporated (FFTCI). This resulted in a revised focus on developing a forests harvesting model and field testing the model in collaboration with six small loggers associations in the Upper Berbice Region namely:

The Objectives of the project aimed at developing a timber harvesting and forests monitoring pilot model for one concession each from the mentioned small loggers associations,  improve the  capacity of six small loggers associations to manage their concessions, develop a mechanism for transferring data and information flows between the concessionaires and GFC and conduct field testing of the monitoring protocols. The project was implemented over thirteen months with $122,000 USD in support.

In keeping with the FLEGT Voluntary Partnership Agreement (VPA) the logging associations have greatly benefitted from the assets received and the capacity development; as such they are better prepared to meet the requirements of the VPA. He proceeded to thank the FAO and the EU for their continuous support of initiatives aimed at empowering loggers and hopes for their continued support.

Mr. Singh further stated the vocational training of the forestry sector is an on-going activity being undertaken by the Forestry Training Centre Incorporated.

Food and Agriculture Organization Resident Representative, Mr. Reuben Robertson in his remarks thanked the EU for their continued partnership with FAO in ensuring that relevant projects are realized. It was further emphasized that the FAO and the EU supports the strides being made by Guyana in the VPA development and as such achieving the project outcomes will be beneficial to both the loggers and the country. This project, he pointed out supported loggers who are now able to monitor their concessions through capacity development and with the equipment received, a constraint of loggers has been remedied.

In delivering the feature address, Advisor to the Minister of Natural Resources, Mr. Clayton Hall highlighted the strides being made by Guyana in the FLEGT VPA. He stated that often the importance of Governance is neglected in the management of the forests as a resource. As such the Ministry of Natural Resources is proud the project has resulted in capacity development of small loggers while providing them with needed equipment to ensure their forests monitoring practices are improved, he added.

Mr. Hall further stated the Government is focused on ensuring transparency in governance as such logging has to be conducted in a manner that is transparent and within the laws of Guyana.

Meanwhile, a presentation delivered by the Manager of the Forestry Training Centre Incorporated, Mr. Quacy Bremner provided valuable insight into the project and its outcomes. The presentation highlighted the critical successes of the project and offered recommendations for future areas to be addressed. This was reinforced by representatives of each of the associations who stated their gratitude of improving of their livelihoods through the capacity development provided by the Forestry Training Centre Incorporated and the equipment received. 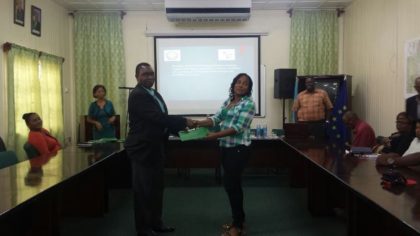