The graduating class of 182 youths and young adults of the Upper Corentyne Industrial Training Center (UCITC), was commended by Minister within the Ministry of Social Protection, Keith Scott, for staying the course of their training.

The Minister was delivering the feature address at the National Training Project for Youth Empowerment’s (NTPYE) graduation at the UCITC, in Region 6 on Wednesday.

Minister Scott noted that 50 years ago the current opportunities did not exist, “Hence the key to success is to adapt to change.” He spoke of the speed of changing technology, which “doubles every 10 years”. The Minister urged students to keep abreast with changes in their various fields, stating that, “Government is dedicated to ensuring that they have the tools to do so.” 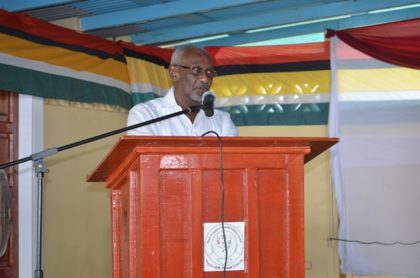 The Minister further urged the graduands to expand their knowledge base and capital, as “Guyana’s future is with you….see yourself as someone who has been given a skill to develop yourself and your country.”

The Minister also spoke of new industries such as those in oil and gas which require skills which can only be imported currently such as underwater welding. Government will facilitate training in these new fields and graduates must take advantage of any training being offered, he said.  “The key to success is to adapt to change,” Minister Scott reiterated at the event chaired by Board Member, Linden Murray.

Delivering the charge to graduands, BIT’s Vice Chairman, Nowrang Persaud, recalled that the intention of students in years past to simply move away from working with their hands. He cited the changing technology and said those who were successful are, “now charged with bringing life to the nation.” He also urged that they display the right attitude to those they are employed with or find employment with. The example set by the late Engineer, Walter Willis, Persaud said, as a “Nation Builder and not just an engineer, as recalled by notable Guyanese,” was one who should be emulated. 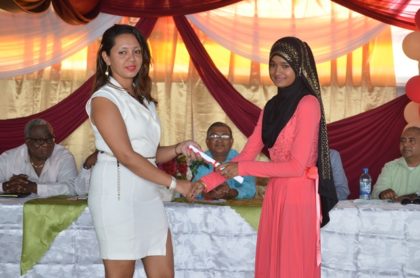 In closing, he called on the graduates to, “Go bravely, go with the right attitude and success will follow.”

Giving a report on the joint Board of Industrial Training and UCITC Centre’s third programme in the Region, Administrator Azad Sugrim, said participants were trained in several disciplines over a period of 26 weeks.

Chairman of  BIT, Clinton Williams, during a review of the programme’s performance from 2013 to 2016, noted that BIT has intensified, “the delivery of relevant occupational, technical and vocational skills training with a view to addressing entry level occupational skills demand for current and emerging industries and services.”

Williams added that emphasis is being placed on vulnerable groups such as school dropouts, hinterland youths, those from depressed communities and the differently-abled. This focus, Williams said, will positively impact on employment generation and employment, empowerment, and contribute positively to crime prevention and poverty alleviation. 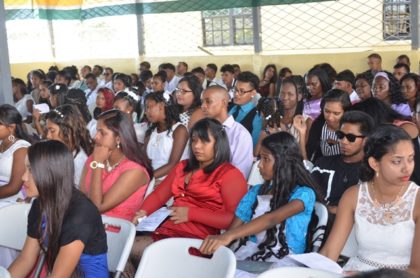 The BIT training was conducted in engineering, building construction, health services, home economics and forestry, and the programmes are being executed in all of the Regions except Region 8. A programme will be launched very soon in that region and will cater for training youths in skills needed in the predominantly mining areas.