The Ministry of Agriculture’s National Agricultural Research and Extension Institute (NAREI) is encouraging farmers to engage in nontraditional crop production as it continues to promote its Agricultural Diversification Project (ADP) across the regions.

Over 30 farmers were educated on the cultivation of these two root crops through sessions which focused mainly on drainage and irrigation, along with fertilisation.

The Brazilian machine used to cultivate and harvest cassava at the National Agricultural Research and Extension Institute’s, Kairuni Horticulture Station

Aretha Peters, NAREI’s Research Assistant who facilitated some of the sessions explained to the farmers that, “moisture has a decisive influence on sweet potato growth and production; the water content of the leaf is 86%, steam 88.4% and the tuber 70.6%.”

Peters pointed out that the soil must be kept moist during the growth period, which ranges from 60 to 120 days. Sprinkler irrigation is one of the best techniques for this type of crop which is similar to that of rain fall. It is delivered through a pressurised pipe network to sprinkler nozzles or jets, which spray the water into the air, imitating natural rain fall, Peters explained.

Meanwhile another NAREI Research Assistant, Premnauth Beecham highlighted that Parika is one of the country’s largest cassava producing areas. NAREI is currently using Brazilian machines to cultivate and harvest cassava at its Kairuni Horticulture Station as part of its experiment to harvest cassava by mechanical means with the aim of enhancing cultivation and production. 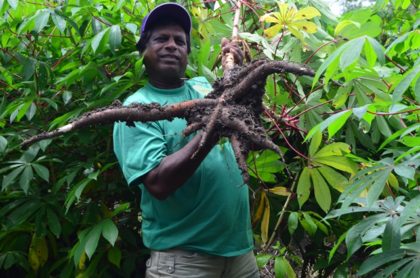 A proud farmer shows off his cassava produce in Parika

Earlier this year, Beecham told the Government Information Agency (GINA) that “a farming group from Parika area has indicated their willingness to use this machine to do their planting because they work in group, and this machine will go up there to aid with the planting.”

Numerous farmers also benefited from training in the use of these machines. This experiment is also a part of the institution’s efforts to promote crop diversification in Guyana.

The farmers were allowed to participate in discussions through the interactive sessions both in-house and in the fields.  Female participants were also welcomed by Beecham, who said that their participation was an excellent sign, since agriculture is often associated with males.

Pumpkin is also another major crop that is targeted under the Ministry’s ADP. It is one of the crops that are targeted for expansion under this programme. 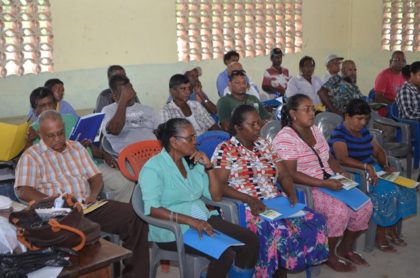 Pumpkin which belongs to the Cucurbitaceae family, (same as cucumber and melons) is a rich source of vitamin A and minerals and can be grown throughout the year. There are several varieties of pumpkin available locally including butternut squash. Pumpkins are distinguished from each other by skin colour and texture. In Guyana, mature fruits can weigh from 5 to 20 kilogrammes.