The problems associated with the shifting Hope Canal Bridge located at Hope on the East Coast of Demerara are a result of poor design and not the failure of the contractor, Minister of Agriculture, Noel Holder said.

The minister stated that records show that DIPCON Engineering Company, the contractor of the bridge, expressed reservations to the previous government with respect to the design of the structure, but the concerns were ignored by the previous Board of Directors.

“The contractor apparently expressed hesitation in implementing the project. It is clear that the Board disregarded these concerns and proceeded in their haste to have the project commissioned for political purposes. This is unacceptable,” the Minister said. 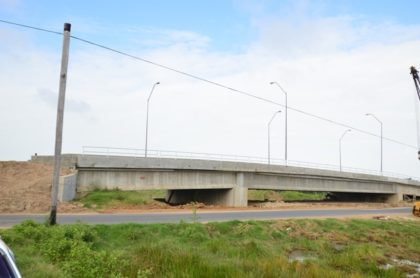 Hope Canal Bridge soon after it was built

The National Drainage and irrigation Authority’s (NDIA) Board of Directors, under the previous administration had requested the consultant, Caribbean Engineering and Management Consultants (CEMCO), to state the reasons for the problems identified with the bridge approach. In their response, CEMCO stated that the contractor’s work complied with the design and specifications of the project.

Given CEMCO’s declarations, it would have been virtually impossible for the NDIA Board, under the previous administration to withhold DIPCON’s retention in light of the consultant’s letter; as it was stated clearly that the contractor complied with the design and all specifications of the project.

Honouring the contractor’s request for final payment by the current board of the NDIA was therefore in keeping with its contractual obligations.

“To now blame the current Board for bad decision making is unethical and an attempt to score cheap political points,” the Minister of Agriculture said.

DIPCON Engineering was recently accused in the print media of employing methods contrary to what was required under the contract and of not enforcing a ‘pre-loading’ strategy in the construction of the foundation for the approach road.

Addressing this accusation, the minister said “The consultant’s letter also answered the claim about the contractor not utilising the pre-loading methodology in the compaction of sand at the bridge approaches…so it is unclear how the media could have arrived at the conclusion that DIPCON was in breach of the original contract.” 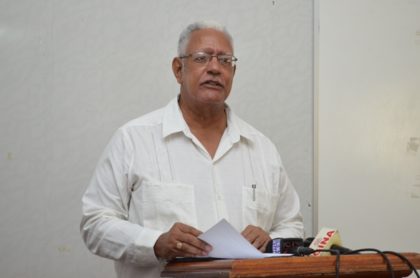 Further, Minister Holder said the actions by the previous NDIA Board of Directors remain detrimental to the country’s economy, as now the Ministry of Agriculture is forced to make additional financial inputs into the Hope Canal Bridge to rectify substandard works which could have been catered for during the defects liability period of the project.

The canal was initiated in the aftermath of the 2005 great flood. The project encountered several setbacks, missing many deadlines, including the original 18-month period for construction after its commencement in February, 2011.

The time-frame for completion was further extended from June, 2013 to August, then to December, then to June 2014, then to September and again to December of 2014.

The bridge is one of four components of the Hope Canal Project, the others being the Northern Relief channel, 10.3kilometres in length from the sea defence embankment to the East Demerara Water Conservancy; a high level outfall sluice; and a conservancy head regulator.