As of January 1, 2020, the company began production and exportation of bauxite from its Bonasika Bauxite Project located in Region Three.

The Bonasika Bauxite Project has been in Guyana since 2008 conducting explorations at its mining site located between the Essequibo and Demerara Rivers. 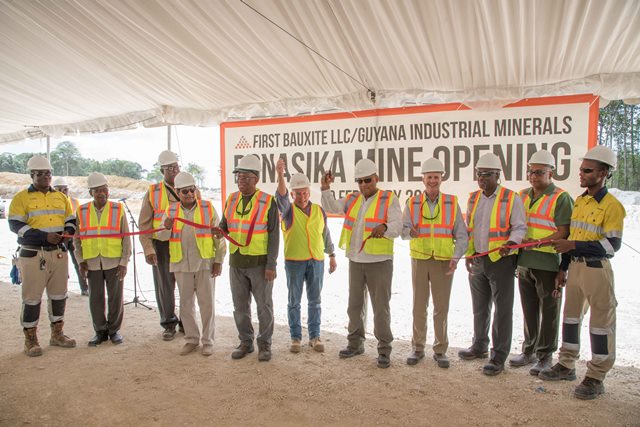 Addressing a simple ceremony to mark the official start of production, Minister of Natural Resources, the Hon. Raphael Trotman, extended congratulations to First Bauxite LLC and GINMIN, noting that it was a moment worth celebrating.

“I am happy to be here to share it with each of you,” Minister Trotman relayed to company executives and employees.

He noted that that the positive impact of mining on the development of Guyana is undeniable, and more so, that of bauxite. The Minister opined that this will continue even as the country embraces oil production and the birth of a new economy.

“The mining sector generally, and bauxite and gold, in particular, have played prominent roles in our economy alongside our forestry and agricultural sectors.  As a government, we are committed to continuing forging ahead to ensure that all sectors remain a viable part of our future development,” Minister Trotman assured.

“I am looking forward to GINMIN’s contributions in 2020 as we see bauxite growing, as we see the mining sector also taking off,” Minister Jordan noted.

In the meantime, President and Chief Executive Officer of First Bauxite LLC, Bill Rice, thanked the government for its support from the inception of the project.

“The Government of Guyana has been with us since day one which is now many years ago, starting with the ability to explore this area.” “And now, it is the highest quality bauxite in the world.” Rice declared.

First Bauxite has 225 employees; 95 permanent staff and 130 contracted workers. Of this figure, eight are ex-pats and the remaining 217 are Guyanese nationals.