Georgetown, Guyana – (August 5, 2016) First Lady, Mrs. Sandra Granger believes that once children are given the right tools, they will press on to higher heights in their education and every other aspect of their lives. The First Lady, today, expressed this view at the Graduation Ceremony of the ICT Training Programme and the Youth Development Initiative, which was hosted in the auditorium of the Friendship Primary School, Friendship on the East Coast of Demerara. 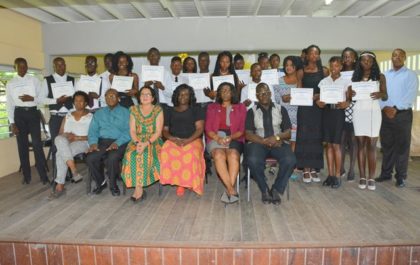 First Lady, Mrs. Sandra Granger, and facilitators, pose with the graduates from the ICT Training Programme

The two programmes were hosted under the auspices of the First Lady and sought to provide children and young adults from the Buxton/Friendship and Victoria Villages with Information and Communication Technology (ICT), literary and other skills. Recognising foremost, the community members, teachers and other participants, who contributed their time and resources to executing the programmes, the First Lady during brief remarks stated that the idea for these two programmes came from the people of Buxton. “Buxton is such an icon in the history in Guyana, I felt that what I had to do had to begin in Buxton,” the First Lady said.

She said, however, that the parents of the children must also be commended for encouraging their children to continue to attend the classes over the weeks that they have been held. “It is a community effort, and at the back of everything I do, I see it as strengthening your community; building back your Buxton and your Victoria…and as these children grow, they will be able to pass on that spirit to other people,” she said. 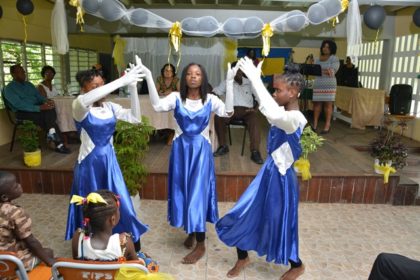 Regional Chairman of the Demerara-Mahaica Region, Ms. Genevieve Alleyne, who served as guest speaker at the ceremony, told the graduates that this investment that they have made in their future is only one step in the direction of accessing the good life, which has been promised by President David Granger and his Administration. She charged the students to be appreciative of the benefits of the programme and to continue to work towards the development of the nation as the country continues to grow.

She stated that she is happy that the First Lady has placed emphasis on leaving a legacy within the Region by working with the young people, adding that education is important to the nation. “Education is the springboard for the development of a community and of a nation. You have been privileged to have been given the opportunity to receive education and skills training and we hope that you will use your skills to serve your communities and ensure that they grow,” she said to the students. She said that the young people- as the future of Guyana- are the key to taking Guyana forward and hoped that the skills that they received at the training would empower them to recognise that their potential. 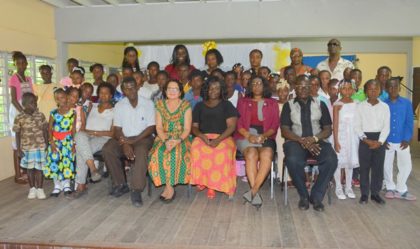 First Lady, Mrs. Sandra Granger, and facilitators, pose with the graduates from the Youth Development Initiative

The ICT Training Programme was a 13 week programme, which targeted young adults from the Victoria and Buxton Villages and taught them skills in the areas of communications, time management, interviewing tips and introduction to computers, along with literacy and numeracy skills and sexual and reproductive health education. The graduates of the programme received certificates, which are recognised by the Board of Industrial Training, while some students received trophies for attendance and overall performance.

The Youth Development Initiative targeted Primary school students and saw over 159 young people receiving lessons in Language Arts, Mathematics, Social Studies and Science. The Programme began in September last year, and volunteer teachers conducted classes after school. The students all received gift vouchers to Austin’s Book Services so as to encourage the students to continue to develop their reading and numeracy skills.