Georgetown, Guyana – (July 29, 2016) First Lady, Mrs. Sandra Granger, today, extended felicitations to the graduates of the Cultural Understanding and Language Proficiency (CULP) Programme and lauded the founders of the Lusignan-Good Hope Learning Centre for their holistic approach to education. The graduation ceremony was held at the centre’s Lusignan, East Coast Demerara location. 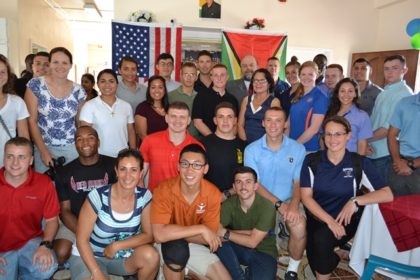 First Lady, Mrs. Sandra Granger poses with the United States Army cadets, who taught leadership and others skills at the Lusignan-Good Hope Learning Centre. United States Ambassador to Guyana, His Excellency Perry Holloway is pictured in the back row, to the left of Mrs. Granger.

Addressing an audience that included United States Ambassador to Guyana, His Excellency Perry Holloway, cadets and other members of the United States Army, Mrs. Granger lauded the centre as a beacon for East Coast villages. It has become “an unofficial community centre where people come in the hope that their problems will be solved,” she said.

The First Lady noted that over the past year her office has teamed up with the centre on a number of empowerment initiatives. The first Self Reliance and Success in Business workshop for women was hosted there. The centre and its parent body, Restoring Hope International, recognise that “education is the primary tool for moving people from poverty to prosperity,” Mrs. Granger said. 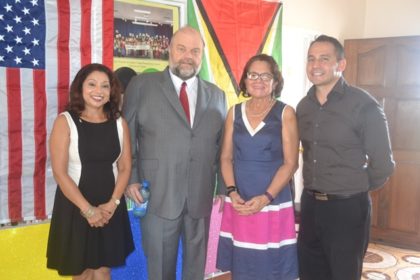 Its mission “…is fuelled by the firm belief that education is the surest route out of poverty. But this centre does not only focus its energies on addressing the problems of illiteracy and innumeracy, it is concerned about the environment in which the children grow and the social and economic challenges they face,” she said. 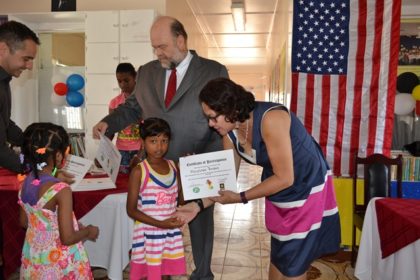 First Lady Mrs. Sandra Granger hands over a certificate to one of the youngest graduates.

The graduates, who ranged six to 16 years old, were taught leadership skills over four days by a group of students enrolled in the United States Cadet programme. The children hailed from Good Hope, Lusignan, Beterverwagting, Mon Repos and Annandale and other East Coast areas. The course is part of the humanitarian service activities hosted under the CULP Programme by the US Embassy with its host population. 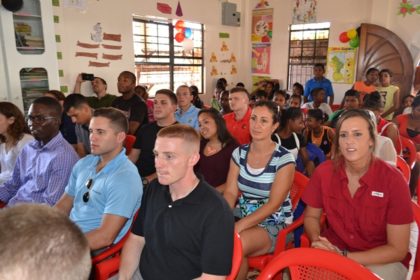 Some of the US cadets who taught leadership and others skills at the CULP Programme. The preteen and older graduates are pictured in the background.

The Lusignan-Good Hope Learning Centre was established 11 years ago by Ms. Sandra Shivdat, with support from her husband. Over the past eight years it has hosted programmes aimed at improving children’s learning outcomes by providing training in literacy and numeracy and other skills. 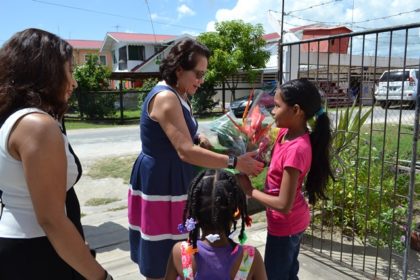 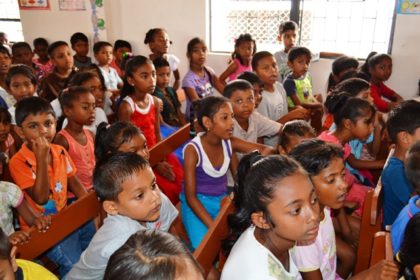