July 28, 2016
Georgetown, Guyana – (July 28, 2016) First Lady, Mrs. Sandra Granger, today, urged the participants at the Third International Moravian Women’s Conference to be encouraged by their faith and to emulate the examples of women in the Bible, who not only overcame the challenges they faced, “but triumphed and influenced the course of history”. 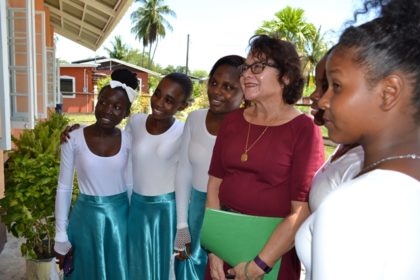 First Lady, Mrs. Sandra Granger delighted some members of the Tabernacle Moravian youth dance troupe when she agreed to pose for a photograph with them.

The First Lady was at the time addressing the opening service of the two-day conference, held at the Tabernacle Moravian Church at Beterverwagting on the East Coast Demerara. The conference is being held under the theme ‘God’s women excelling in grace and truth’.

“I am certain that you are looking forward to a meaningful exchange of ideas and the sharing of your vision of what it means to be not only women living in these challenging and sometimes, frustrating times, but also, to consider how your faith gives you the strength to endure the buffeting of daily challenges, as well as shifting social and cultural values and norms,” Mrs. Granger said. 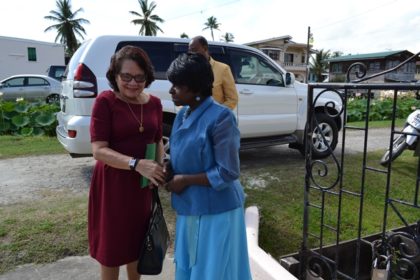 Pastor Victorine Kellman of the Tabernacle Moravian Church greets First Lady, Mrs. Sandra Granger on her arrival at the church for the opening service of the Third International Moravian Women’s Conference.

The First Lady noted that though the lives of modern women differs somewhat to that of women in the biblical era, many things remain the same. Women are still the core around which families are built. The First Lady also commended the Moravian Church in Guyana on its rich history, which began in 1878 at Graham’s Hall and today boasts an active Ministry in its eight churches. 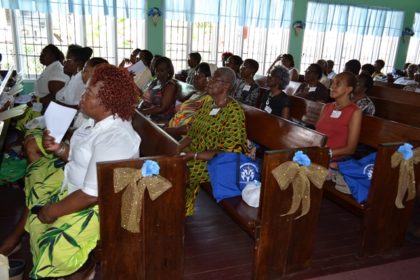 A section of the congregation

The programme featured a special address by guest speaker, Sis. Doreen Johnson and greetings by Mr. Noel Adonis, Chairman of the Guyana Province of the Moravian Church.