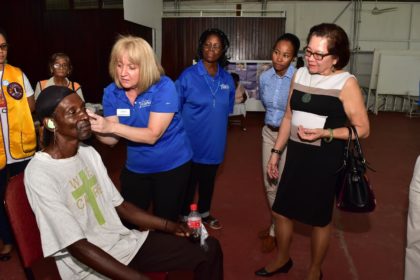 The First Lady expressed appreciation for the services provided by the Foundation, which are free of cost and will later see persons who are hearing impaired receiving unique hearing devices.

Today’s mission, which was held in collaboration with the Audiology Department of the Ministry of Public Health, tested patients with hearing impairments, provided basic hearing healthcare services and took ear impressions for ear moulds  to make custom hearing aids, which will be provided at a later date. The team aims to examine 500 patients registered with the Audiology Department over the course of two days.

Dr. Luqman Lawal, Director- Global Health and Research was pleased with the large turnout for the mission. “It’s been phenomenal. We’ve had a great relationship with the First Lady’s office and the Ministry of Public Health… We worked with the Department of Audiology and we were able to mobilise more than 250 patients to the mission today,” he said.

In an invited comment, Mr. Lawrence Thompson, a beneficiary of the programme also expressed his gratitude. “I appreciate the good help of the Government has given to me because many people are poor and they can’t afford to buy a hearing aid and they really need help so I just appreciate the help the Government has given to each of us. It is a good thing [they] are doing, he said.

The Starkey team also included Mr. Skye Girardin, the final quality control officer on this mission and Audiologist Dr. Justine Hammer. The Foundation plans to return to Guyana later this year to outfit recipients with their hearing devices.

Ms. Ariane Mangar, Director-Disability Rehabilitation, Ministry of Public Health and Dr. Ruth Quaicoe, Head of Audiology in Guyana, also attended the exercise. The mission also benefited from assistance provided by volunteers from the Lions and Rotary clubs of Guyana.

Dr. Justine Hammer of Starkey Hearing Foundation explains to this patient how she plans to make an ear impression before starting the procedure. 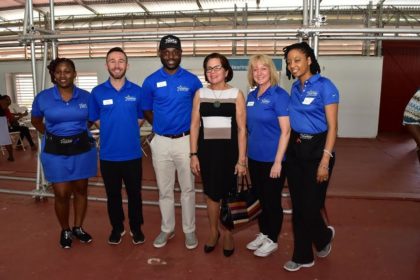 First Lady, Mr. Sandra Granger (third from right) and some of the members of the Starkey Hearing Foundation team. The Hearing Mission was led by Starkey’s Dr. Luqman Lawal who is pictured third from left. 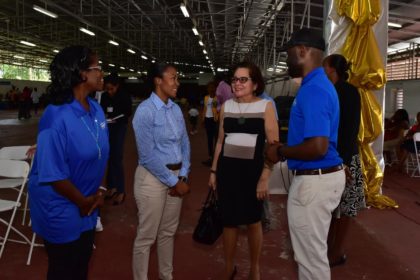