The project aims to, firstly, to provide 150 backpacks and school supplies for students from both the Lima Sands Nursery and the Lima Sands Primary schools onAugust 20. The group also plans to enhance the Lima Sands Nursery School by providing outdoor playfield equipment, repainting its interior walls and renovating its library. A medical outreach exercise will also be held to benefit the entire community. 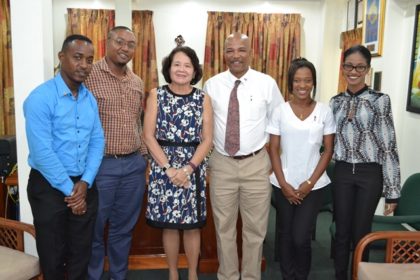 “I am happy to support any project that supports children’s development and I found the Rotaract project to be a worthy one,” the First Lady said.

Mr. Maxwell acknowledged that his group needs monetary support to realise the success of this project. As such, he extended gratitude to the First Lady for her financial support. “Like any other project it is a hefty cost so we try as much as possible to reach out to the private sector and as much as possible to the Government as well. The First Lady [responded] to our call and …donated to this project… she has agreed financially to provide the support we need to [realise] this project,” he said.