August 2, 2016
Georgetown, Guyana – (August 2, 2016) First Lady, Mrs. Sandra Granger is optimistic about the impact that the Science, Technology, Engineering and Mathematics (STEM) Guyana Robotic Camp will have on the participants, through the development of  their knowledge about technology and its potential to spark their creativity. 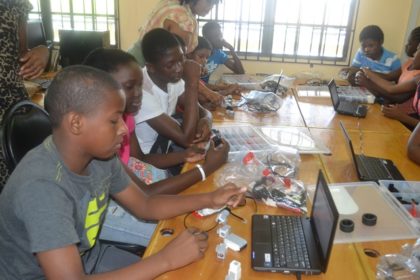 Students from the Buxton-Friendship, East Coast Demerara area participating in the STEM Guyana Robotic Camp at the Friendship Primary School.

“I saw all the possibilities of robotics and the increase in knowledge of technology for [the] young people. [It is] a new way of learning, a new way of getting excited about something,” Mrs. Granger said, at the opening of the workshop for students in the Buxton-Friendship area, held at the Friendship Primary School.  Thirty students aged 10 to 14 are registered in the programme, which is being conducted by Guyanese born Ms. Karen Abrams and her four children: Ima, Asha, Caleb and Joshua Christian, all of Atlanta, Georgia, United States of America. 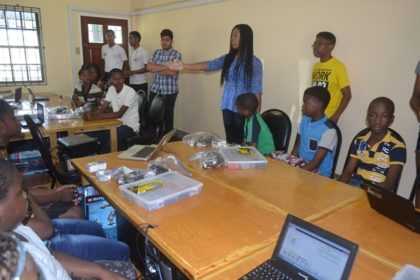 Ms. Isha Christian (fourth from left) gestures while making her presentation. Some of the other trained volunteers are also pictured standing.

The First Lady said when Ms. Abrams first approached her about the project she was pleased because of its potential positive impact on children. The workshop is for children, who are intellectuals, as well as those who may not be literate or numerate. She also expressed hope that the workshops can eventually be expanded nationwide.

The STEM Guyana Robotic Camp has its genesis in the Abrams family wanting to give back to their homeland. They publicised their interest in hosting the workshops and several groups and businesses in the United States, Canada and locally have since thrown their support behind the effort. 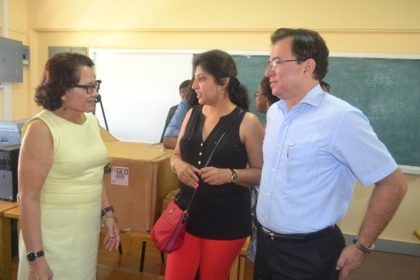 First Lady, Mrs. Sandra Granger interacts with Mr. and Mrs. Sony, the parents of two of the trained volunteers

The Buxton workshop is being funded by Ms. Joycelyn and her husband Mr. Morris Wilson and the Buxton/New York group. Ms. Wilson is also a member of this group. Ms. Wilson encouraged the students to capitalise on the opportunity to learn. “There [are] so [many] opportunities for you guys, all you have to do is stay focused. Know what you want [and] aim high,” she said.

Ms. Carolyn Moore, a representative of Team STEM Guyana of the USA, which also provides financial support for the workshop, also attended the opening. 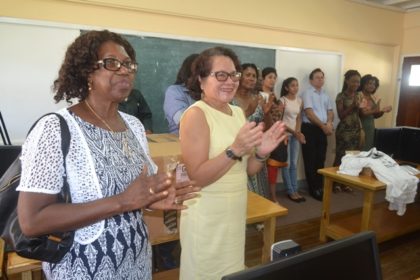 Another workshop is also being held at the Lusignan/Good Hope Learning Centre for children from that area. All the sessions are co-ordinated by Mr. Fitzroy Younge, under the auspices of the Office of the First Lady.  He is assisted by Ms. Ovian Mansfeld and a team of five trained volunteers, including Mr. Donwin Stuart, Mr. Jamal Mosely and Canadian siblings Ms. Kavya Sony and Mr. Ojas Sony.