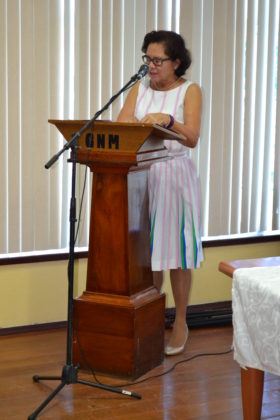 First Lady, Mrs. Sandra Granger, today, lauded the timeliness and the agenda of the Guyana Olympic Association’s (GOA) Women in Sport Seminar, which was convened to discuss issues specific to girls and women, who participate in sport and to begin the process of breaking down barriers to equality.

In her address at the Opening Ceremony, held this morning at the National Sports Resource Centre on Woolford Avenue, the First Lady said she is pleased to note that the forum aims to create a network of women in sport in Guyana with the view of establishing a database of Women in Sport.

“[This is] extremely important since your network will hopefully create a supporting mechanism for women, who participate in sport throughout the country and your database will provide the empirical data you need to assess your status and assist you in planning for your development and expansion,” Mrs. Granger said.

The First Lady also said that it is commendable that there is at least one female executive member in most of the over 21 national federations affiliated to the GOA, and expressed hope that the GOA’s Women in Sport Committee would be established by the end of the exercise. She noted that though women have competed in sport for centuries, they do not compete on equal terms against men.

“Today, women compete in many games, both professionally and as amateurs, individually or in teams, in individual events and in triathlons and pentathlons, but they remain discriminated against in terms of media coverage [and] endorsements. They are criticised by some because they are perceived to not be as strong as their male counterparts, hence they should not receive the same remuneration,” she said. 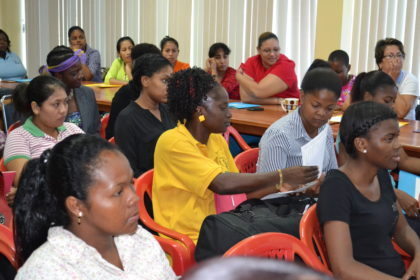 The seminar’s packed agenda aims to find solutions to these and other challenges facing girls and/or women, who wish to participate in sport and includes topics such as the benefits of physical exercise for girls and women, how to balance family life, career and sport and nutrition and women in sport.

“We want to encourage more persons to participate in sport and Physical Education,” said Dr. Karen Pilgrim, Vice-President of the GOA and chairperson of the Opening Ceremony. Meanwhile, Mr. Kalam A. Juman-Yassin, President of the GOA, said that the group hosted the seminar because it believes that “women can be the catalyst for the development of our young sportsmen and women”. 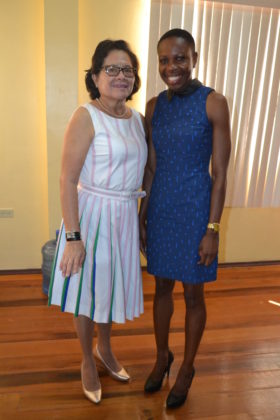 Mr. Juman-Yassin also expressed hope that by the close of the forum the participants will find ways to include hinterland schools and athletes in national sporting events so that they too will be able to represent Guyana regionally and internationally. He also announced that GOA has teamed up with the government to equip all schools countrywide with table tennis gear. 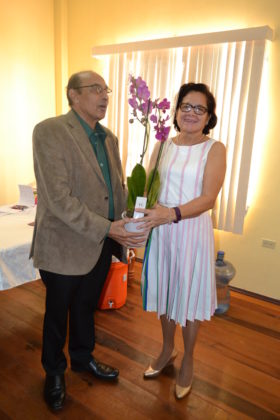 Mr. K.A. Juman-Yassin presents First Lady, Mrs. Sandra Granger with an orchid in appreciation for her attendance at the GOA’s Women in sport Seminar, this morning

Representatives from the National Sports Commission, Physical Education teachers from all but the Upper Takutu-Upper Essequibo (Region Nine) and representatives from various sporting disciplines, including football, rugby, swimming, squash, badminton, hockey and track and field also attended the forum. 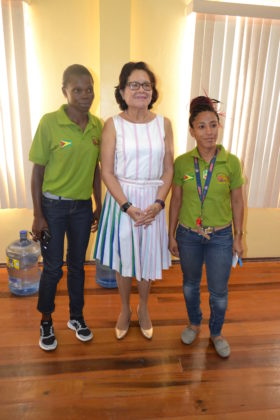