First Lady visits the men of the Palms Geriatric Home

Georgetown, Guyana — (June 15, 2018) First Lady, Mrs. Sandra Granger, on Tuesday, paid a special visit to Male Ward of the Palms Geriatric Home as part of an collaborative effort between the Ministry of Social Protection, Destiny Empowerment Centre, Women Across Differences (WAD) and the Luminous Women Group to treat male residents to a pre-Father’s day glam session. The event, which was coordinated by the Office of the First Lady, was held at the Palms Geriatric Home, Brickdam, Georgetown.

Mrs. Granger noted that through the initiative, the male residents benefitted even while the newly minted participants of her Care for the Elderly Workshop were able to put the knowledge they would have gained to the test.  “Some of the teen mothers have completed the Care for the Elderly Workshop… So, some of them have that experience and it gives them additional practice of dealing with the men and the ladies… The [interaction] between the elders and the girls is to expose them and to have them interact with the older persons…it adjusts their mind-set on how you deal with the older people,” Mrs. Granger said.

In an invited comment, Coordinator of WAD, Ms. Clonel Samuels-Boston said that the girls’ participation in the activity helps to bridge the gap between the older generation and the new. “They were able to put what they did in theory into practice… [It] is important also that they, as youth, are able to bridge that gap and to respect the elderly… There are so many of them who came from single parent households. So many of them… did not have the opportunity to be have adult interaction or to [be] loved by a father… I think it was a good opportunity for them to…feel that…They have boy children, so they themselves will know how to parent their boy child or children,” she said.

WAD participant, Ms. Bibi Baptiste said that she was deeply moved after participating in the glam session. “Pampering the elderly gentlemen… was wonderful. [It was kind] to give back to them because … they [have already] given to the society. [We] helped them to do thing they [can’t] do… They said they would always remember us and they asked us when we would [be] back,” she said.

Surprised by the gratitude of the elderly men, Ms. Shavani Lynch said that the experience was very rewarding. “It was [my] first time pampering the elderly men… It was nice. Over time I’ve heard a lot of negative things about the [elderly] males and being there [was] totally different [from] what people say… I don’t have a father and dealing with someone who could be my father or grandfather… was good… It felt good and I felt good that I could make someone [else] feel nice,” she said.

The men were treated to barber services from Razor King’s Barbershop and received gifts of personal care items, which the First Lady distributed during her visit. 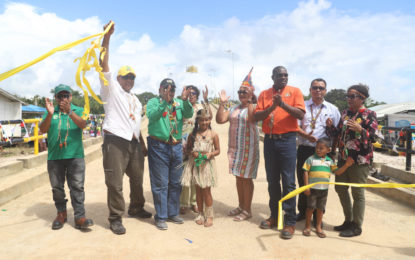 Author Details Shaquille Bourne Author email shaquille.bourne@dpi.gov.gy DPI, Guyana, Saturday, January 18, 2020 A $119Million concrete bridge was officially handed over to the Moruca subdistrict of the Barima-Waini Region. This comes after less than 2 years when a contract was inked to rebuild the... END_OF_DOCUMENT_TOKEN_TO_BE_REPLACED

Promoting a love of reading