An interactive workshop to discuss the recommendations of a consultancy project aimed at developing a pricing structure for the National Accreditation Council (NAC) service was today held at the National Centre for Education Research and Development (NCERD), in Kingston. It also focused on the need to upgrade the Council’s regulatory framework.

Present were staff of the NCERD, NAC, external evaluators, quality assurance core groups, and representatives from the private and public post-secondary and tertiary educational institutions in Guyana.

This first stakeholder workshop is part of a larger project aimed at addressing the current inadequacies preventing the Council from effectively functioning. 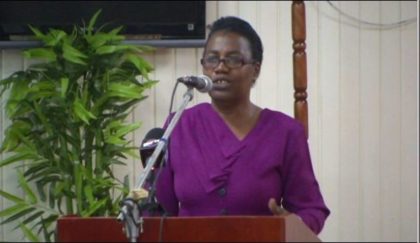 Executive Director, NAC, Deborah Jack noted that though the council came into being in 2004, because of various reasons it has been unable to deliver its services in accordance with Act No 12 of 2014.

Act No 12 of 2014 provides for the establishment of the NAC and vests in that body, among others, the power to grant recognition to awards obtained in Guyana and internationally.

Another service which NAC was expected to deliver was, assistance to the Caricom Secretariat, in relation to the provisions of the CARICOM Single Market and Economy (CSME) regime, by  offering the service of equivalency of qualification.

Jack said that currently, the NAC is not able to give that kind of support. This and other challenges experienced over the years have resulted in  the Council being offered the opportunity to be a part of an institutional strengthening project funded by the EU and managed by the Caribbean Development Bank (CDB.)

The NAC institutional strengthening project, which allows the Council to build capacity, “in the areas that are important to the fulfilling of our services,” has three main deliverables Jack said.

She identified these as; the draft regulations and fee structure for NAC service development; a National Qualifications Framework and Quality Assurance System development (including manuals) for NAC services; and the purchase of a scanner and photocopier for NAC equivalency service.

The deliverables of the draft regulations and fee structure for NAC service development was the focus of today’s workshop. 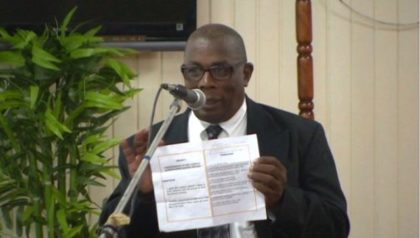 Consultant John Charles delivering his report on the consultancy

Jack explained that John Charles, of Dominica, was contracted to draft the legislation that would give support to ACT No 12 of 2004 and in so doing, help NAC deliver it service more efficiently.

The stakeholders’ role at the workshop was to discuss the draft revised regulations put forward by Charles, for correction and modification, before they are tabled in the National Assembly.

Providing an overview of the consultancy, Charles explained the need for the review and update of the legislation that deals with the regulation of post-secondary and tertiary education institutions in Guyana.

“Globalisation is here to stay so we have to be mindful of treaty and arrangements that the government has entered into, in terms of establishing the CSME, and highlighting the freedom that goes with the CSME,” Charles pointed out.

He noted that these provide the opportunity to interchange and exchange and to qualify, with qualification that are recognized not only in Guyana but throughout the world.

“Therefore, part of the role of NAC is not only in government providing for education but ensuring that its (Guyana) international obligations are not compromised by its national obligation,” Charles pointed out. 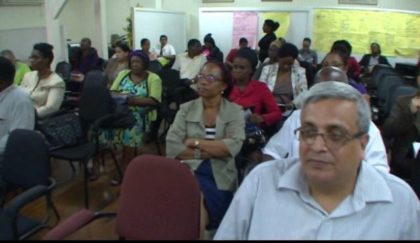 Stakeholders gather at the NCERD Building, Kingston to discuss draft revision to the regulations that would help NAC to better deliver it services

Present also at the workshop were several NAC Board Members including Archibald Clifton and Executive Director, Accreditation Council of Trinidad and Tobago, Michael Bradshaw. Bradshaw has been contracted to execute component two of the Strengthening of the NAC-Guyana Project; a National Qualifications Framework and Quality Assurance System development (including manuals for NAC services).