Five municipalities have received tractor-trailers to assist them in waste management and the promotion of the Green Generation Guyana imitative, which encompasses the 3Rs: reduce, reuse and recycle. 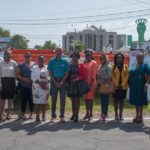 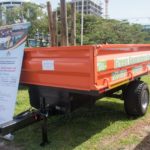 One of the tractor trailers.

“The motto of the ministry is to develop, cohesive, empowered and sustainable communities. In this regard, the sanitation of our towns and communities and in particular solid waste management is an important aspect of that mandate,” Minister Bulkan stated.

He added that the central government had invested in capacity building and upgrading the municipalities’ equipment in all five of its previous budgets.

“The example of Haags Bosch […] provides evidence of the emphasis that is being placed by this administration to ensure that these eyesores that we previously had -which where dumpsites – are converted into modern and proper sanitary landfills.”

Head of the Sanitation Management Unit (SMU), Gordon Gilkes, said the equipment was a significant boost for his unit since waste management was essential for a greener and cleaner economy.

“We are encouraging the municipalities to up their waste management programmes in terms of reducing, re-use and recycle and, if possible, to look at energy recovery from the waste before they have final the disposal,” Gilkes said.

In the future, SMU plans to work on developing more sanitary landfill sites and capacity building by equipping the municipalities and promoting the 3Rs. They will also visit various municipalities to train personnel in solid waste management.

The ministry had previously donated tractors to the municipalities.