A five- year action plan to transform agricultural production in Region Nine would see optimisation of the Intermediate Savannahs with focus on aquaculture, livestock development, crops, and small ruminants.

Government has previously stated its intention to push agricultural development in the hinterland and intends to open up 4,000 acres of land as part of the plan to develop Region Nine.

Interest away from the coast

Most of Guyana’s agricultural produce are cultivated on the coastland. Its coast is below sea level, and bouts of flooding are experienced during the rainy season. Mindful of this, government is implementing strategies to introduce large scale agriculture into the intermediate and Rupununi savannahs, utilising eco-friendly and cost-effective methods.

Minister of Agriculture Noel Holder speaking to the Government Information Agency (GINA) said that the world is moving away from clearing of forests which are widely known as the lungs of the earth. Hence, feasibility studies to look at proper land use, available water resources and other factors would have to be undertaken. The Minister explained that the objective is to reduce the hinterland’s dependency for agricultural produce from the coast.

“The hinterland communities which are very fertile but are inaccessible, the new development plans see to what extent those communities could become totally self-sufficient so the need to supply food, fly in food supplies at tremendous cost is eliminated,” Minister Holder explained.

Region Nine has large expanses of land for agricultural purposes

A partnership has been formed with the Caribbean Agricultural Research and Development Institute (CARDI) and the Ministry of Agriculture to support the region towards realising its agricultural potential.

Chairman of Region Nine, Brian Allicock, told GINA that CARDI’s initial focus was on spices such as black pepper, ginger, and turmeric. However they have recently expressed an interest in establishing a coconut plantation. Such a development, Allicock stated will tremendously benefit the residents.

“We are trying to expand, open them to the larger farm so that some of them would take it up and go with it, they would benefit because you know, if you establish a plantation in a village structure, the entire village would benefit,” the chairman explained.

Exploring the possibilities of aquaculture is another aspect of the developmental plan for the Upper Takutu-Upper Essequibo region. During the sunny periods, the rivers usually dry up causing many of the fish to remove from their locations or die. Hence, having aqua farms will serve as a food source. The region will be receiving support from the fisheries department of the Ministry of Agriculture in this regard.

“We are trying to educate people, we could do our own rearing of fish in aquaculture so now we have to think about equipment to do that and of course the Ministry of Agriculture, they are very willing to assist,” Allicock said. 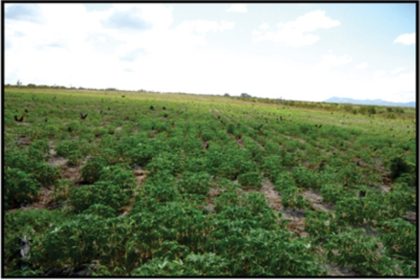 Cassava cultivation in the Rupununi

The Guyana Livestock Development Authority (GLDA) is currently working at the Ebini experimental station to breed farm animals that would thrive in the savannahs.

Head of GLDA, Nigel Cumberbatch said that sheep, goats and cattle are the main type of livestock being looked at in Ebini. In terms of cattle, the pure breed Zebu, the Beef Master, the Brangus and the Simmental are being experimented on. 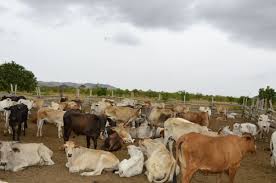 Objectives of the strategy

The five-year strategy is expected to improve food and nutrition security, reduce poverty and enable sustainable and integrated development of local communities in Region Nine.