As residents of Den Amstel and Anna Catherina press ahead to return their homes to normalcy, Minister of Communities, Hon. Ronald Bulkan along with the Civil Defense Commission (CDC) and the Regional Democratic Council (RDC), on Wednesday, visited and distributed several items including cleaning detergents and food hampers.

Minister Bulkan met with several residents of the Essequibo Islands-West Demerara villages who recounted what occurred when they awoke on Saturday morning to rapidly rising seawater in their homes, businesses, churches and schools. 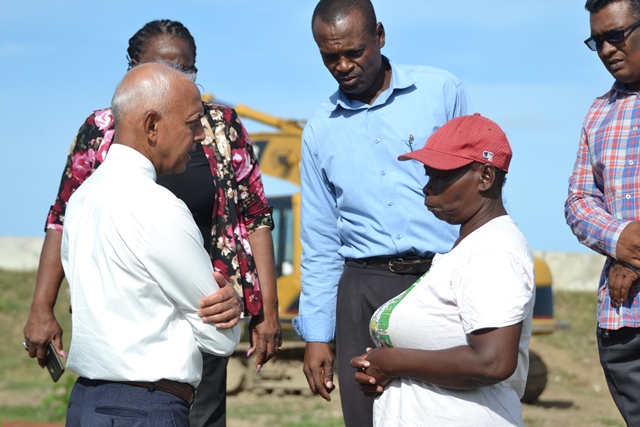 Minister of Communities, Hon. Ronald Bulkan interacting with one of the residents. 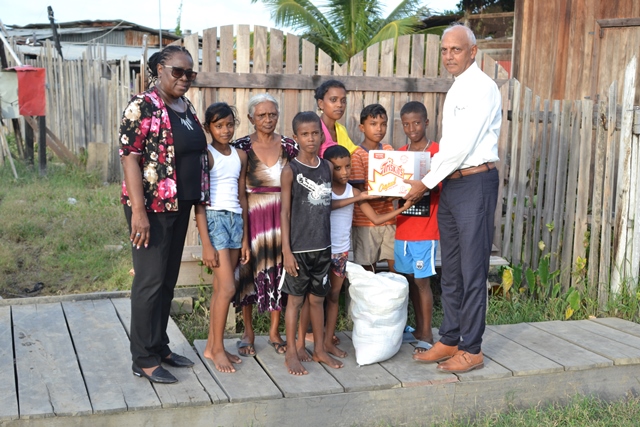 Minister of Communities, Hon. Ronald Bulkan handing over are packages to an affected family. 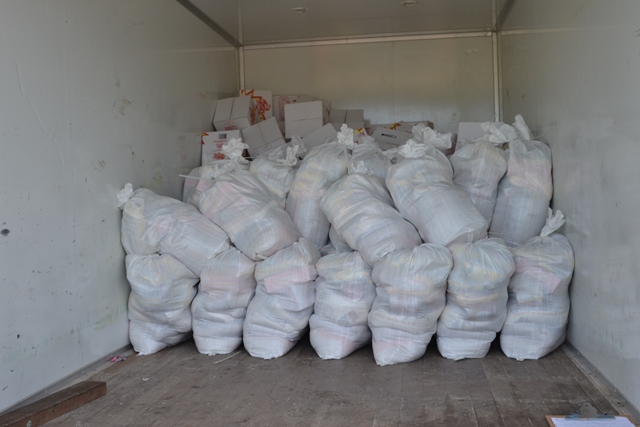 Some of the items distributed to the residents.

One of the most affected was an Early Childhood Centre located in the compound of the Ebenezer Church in Den Amstel. 25 children are currently enrolled and would not be able to attend school for the next two weeks.

According to Reverend Austin, this is the first time the area has experienced such severe flooding. The floor, teaching aids and toys were damaged as a result of the inundation.

“When I came to assess what was happening I saw the entire place was under water and this is the first time we have seen this amount of water in the compound, in the church building and the school and so the damage is quite a lot because most of the things are stored flat at the level of the children… so now we will have to clean, sanitise and get the school up and running to accommodate those children.”

Minister Bulkan promised that his ministry will collaborate with the Neighbourhood Democratic Council (NDC) to ensure that classes are resumed at the school at the earliest possible time.

He advised the Reverend to compile a list of the damages and present it to the NDC chairperson and, “we will see what support we can give to replace the teaching aids and toys that and assist with the rehabilitation works,” the minister said.

Den Amstel was one of the villages not affected by the floods earlier this year. However, Minister Bulkan commended the NDCs for playing their part in ensuring support was given to those were affected.

“It is very unfortunate, it’s a lot of dislocation and distress… The residents have commended the work done by the NDC; and it’s heartening for us to see that the campaign for the restoration of Local Government in Guyana and the revitalization and rehabilitation of the functionality within local government organs, is taking roots albeit in varying degrees. But a local council is always the first responder because there are intimately aware of all of the residents within their NDC area and they are the ones who are.”

Over at Anna Catherina, the residents raised concerns about the irregular maintenance of internal drains in the village. It was explained that the internal drainage falls under the ambit of the NDC. Minister Bulkan assured that he will be engaging the NDC on the issue.

Regional Information Officer, Ganesh Mahipaul explained that the region has a disaster risk management team that was immediately activated when the flood struck. In conjunction with the CDC and the National Drainage and Irrigation Authority (NDIA), the region conducted assessments in Zeelugt, Anna Catherina, Cornelia Ida, Den Amstel, Hague and Fellowship.

He added that drainage was not an issue, rather, an extensive amount of water was due to the overtopping the seawalls. Once the high tide went the floodwater receded quickly. Cleaning detergents and care packages were also distributed to the other affected areas.