Food for the Poor officials call on President

Georgetown, Guyana – (June 24, 2016) President David Granger was, today, paid a courtesy call by the President and Chief Executive Officer (CEO) of Food for the Poor’s Florida Office, Mr. Robin Mahfood. The meeting was held at the Ministry of the Presidency.

Mr. Mahfood was accompanied by the CEO Mr. Kent Vincent and Chairman of the Board of Food For The Poor (Guyana) Incorporated, along with, Mr. Paul Chan-a-Sue and Mr. Brinaire Jean.

President Granger expressed his appreciation to the visiting delegation on behalf of the Government and local beneficiaries. He said that Food for the Poor, which has become a household name in Guyana, has helped countless families to help themselves, particularly with his housing programme.

“From a social point of view, the housing programme has been able to keep families together…without housing families would not be able to stay together and once families fall apart, society falls apart,” President Granger said.

Mr. Mahfood said that Food for the Poor understands that Governments alone cannot provide all of the finances needed to support vulnerable populations and as such, it stands committed to assist in any way that it can.

He disclosed that the organisation has provided 9,400 housing units, built 47 schools and two hospitals, outfitted 360 schools with furniture and shipped 4000 containers of aid items to 17 countries.

Last year President Granger announced that the Government will be providing two hectares of land for the organisation in Guyana for the construction of a larger facility. The Government also committed to providing duty-free concessions for all vehicles imported by the organisation to conduct charitable work and a fix annual subvention commencing from this year.

Mr. Mahfood said that Food For the Poor is extremely appreciative of this gesture on the part of the Government, particularly the donation of the land where a large warehouse will be built to safely store relief items such as medicines for hospitals. He also informed that the organisation is looking to expand its reach across the 10 Administrative Regions. 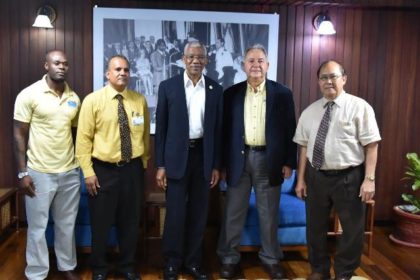