…to encourage greater participation in the sport

(February 5, 2020) – Four schools were presented with football gears today at the Ministry of Education’s Sports Complex, Carifesta Avenue. The items donated included uniforms and balls to be used by the students as they continue to play the sport at the school level.

Present at the handing-over ceremony was Minister of Education, Dr. the Hon. Nicolette Henry, Minister of Social Cohesion, Dr. George Norton and President of the Guyana Football Federation, Mr. Wayne Forde, officers of the Unit of Allied Arts, students and teachers. The items were made possible through a partnership with the Ministry of Public Telecommunications. 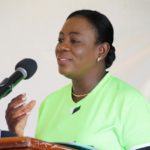 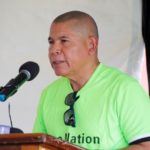 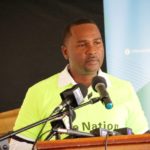 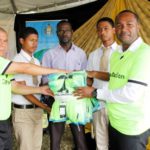 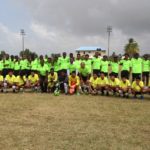 Ministers Henry and Norton posing with the students in their new uniforms.

According to Minister Henry, football provides maximum physical exercise and like any sport it also provides many health benefits for children. “It’s a physically demanding game that offers an opportunity for players to improve their speed, agility, strength, hand-eye coordination and overall cardiovascular endurance”, Minister Henry noted.

She said that the Ministry of Education is cognizant that providing academics is merely a percentage of creating the ideal student, but opportunities for a healthy lifestyle, morals, values and discipline are extremely important.

She added that the Government of Guyana is adamant that young people must be given the best opportunities to develop their potentials. “The decade of development aims at more than socio-economic improvements but entails holistic development for all Guyanese”, Minister Henry remarked.

Meanwhile, Minister Norton noted that while the government is pushing education as its main agenda, the administration has recognized the importance of sports and the benefits of promoting a society of healthier and better rounded individuals.

“Sports is an important economic benefactor, and a crucial vehicle to drive social cohesion and unity among our people,” Minister Norton said.

As such, he added that investments in sports are always worthy. Further, he said that it is the government’s intention and his Ministry’s mandate to improve and enhance sports infrastructure throughout the country.

He said, “In addition to our new synthetic tracks being constructed in Berbice and Linden, we have also invested heavily and will continue to invest in the development of sports grounds and playfields in almost every community. We want to ensure that our children and youths have the facilities they need to not only be physically active and have fun, but to also prepare and practice for competitions that will propel any professional sports aspirations they may have.”

President of the GFF, Mr. Wayne Forde in his remarks said that the federation has realized that the best return on football investment is in the school environment. He said that when school children are given an opportunity to play sports, they learn to respect rules, play in a team setting, to win, to lose and other life skills to become a productive adult.

According to Mr. Forde, although the school environment is centred primarily around academics, mixing with sports will create a well-rounded individual. He said that the Government of Guyana has been an important partner in football development. He said that the football fraternity has been able to acquire the most football real estate as compared to any other time in Guyana’s history and as such will continue to work with the relevant partners to continue developing the sport.

Following the handing-over ceremony, the students were engaged in friendly matches.