Twenty-four-year-old Romario Hastings, an Environmental Officer, has conducted research into the how the Akawaios people in Kako and Phillipai in the Upper Mazaruni used the environment to predict weather patterns.

His research is entitled the Ethno-meteorological Knowledge of the Kapong Akawaio – people of Kako and in Upper Mazaruni district. 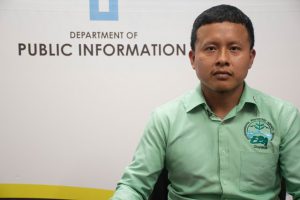 Environmental Officer, Romario Hastings who is also known as a “Kapong”

He told the Department of Public Information (DPI) that while reading for his Bachelor’s in Environmental Studies at the University of Guyana, he conducted his research for a final year project. It received the award for the “best research project” for the academic year 2016/2017.

“I was examining the past research that students did there and the majority of the projects were done on the coastland. For me as an Indigenous student, I wanted to study something new, something different, something related to Indigenous people,’’ Hastings explained.

After collecting his data instruments; conducting surveys and, focus group discussions, as well as interviews with key stakeholders, the Kapong then went to Kako and Phillipai villages in the Upper Mazaruni district to conduct his investigation.  To his surprise some of his findings were unexpected.

“The key findings, I will say, were amazing for me. I did not expect the significance of it initially and the amount of information generated. I was able to collect in total, 92 sets of indicators. These are the elements/indicators and they (Indigenous villagers) observe so that they can make their predictions. These can be either birds, animals, cosmology – they had their own star consolation which was a new finding for me. They have their own naming systems. They also looked at physical indicators such as wind direction, clouds, etc.”  Hastings said.

According to the Kapong, his research, which is now a first to be documented, shows the relevance of the Indigenous culture and practices.

“Our culture is not a written culture. So, it was instrumental that I document this knowledge that is probably on the brink of being lost. To be able to show the importance of this information and how it is applied in various countries. I also think it can help those communities to preserve their cultural practices and knowledge and for them to continue applying this knowledge in their daily lives” he added.

Hastings also represented Guyana, along with several colleagues, at the National Conference of Undergraduate Research at the University of Central Oklahoma in the United States of America to present his findings.