G$2.8 Million in savings per year after the installation of 65 Energy Efficient Street Lights

Georgetown, June 28, 2016 – Following the installation of 65 energy efficient streetlights, the Guyana Energy Agency (GEA) has estimated that there will be G$2.8M in savings per year.

GEA recently replaced 65 High Pressure Sodium Vapor (HPSV) street lamps with 65 energy efficient Light Emitting Diodes (LED) Lamps as part of its ongoing energy efficiency programme. The HPSV lamps were rated at 250 watts each while the new LED lamps are rated at 100 watts each. The switch is expected to lead to significantly lower energy consumption rates. Fifty-eight of the lamps were installed at Timehri, while four and three were installed at the Umana Yana and Camp and Lamaha Streets, respectively.

The Government of Guyana (GoG) presently operates about 6,000 HPSV street lamps, rated at 250 watt and 5,000 lamps within the different municipalities rated at 175 watts, which accrue a yearly operational cost of approximately G$653.7 million dollars per year while consuming 10.4 million kWh of energy.

However, through the use of 100W LED lamps, it is possible to significantly reduce the cost that the current street lighting systems incur. It is estimated that the 65 LED lamps that were installed will reduce the annual energy consumption by 42,705kWh, saving G$2,800,166.85 per year. The simple payback period for these lamps is 1.07 years and the lamps have an estimated lifespan of 11 years.

In order to determine which lamp was best suited for the use in the pilot project, studies were carried out by GEA’s engineers. The engineers, led by Energy Engineer, Leon DeSouza, were assisted by a team of Engineers from the Ministry of Public Infrastructure’s Street Light Division. 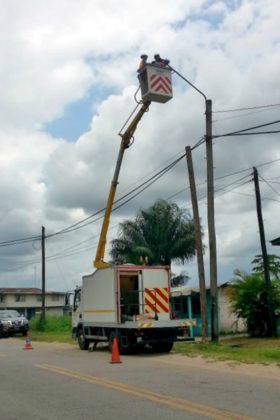 In keeping with its mandate to develop and encourage the development and utilisation of sources of energy other than sources presently in use and to carry out research into all sources of energy (including those sources presently used in Guyana), GEA will continue to explore, install, and monitor energy efficient streetlight technologies with the aim of gaining knowledge and thereby make recommendations that will guide decisions with regards to street lighting.

GEA is calling on all Municipalities, Neighbourhood Democratic Councils, and civic groups to take advantage of the benefits of energy efficiency by installing only energy efficient street lights.