In an interview with the Department of Public Information (DPI), Minister of Indigenous Peoples’ Affairs Sydney Allicock described the Queen’s Baton’s passage through the hinterland regions as a historic moment. He noted that the event could not have happened at a more opportune time. 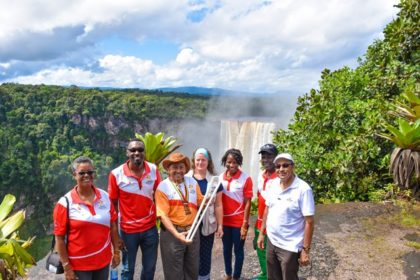 “Today is a very significant day for Surama and Annai, more so the region and the country to be able to have the Queen’s Baton entering into the hinterland of Guyana. I think the opportunity given will allow not only the people of Surama but Guyana as a whole to showcase what we have in the world,” the minister explained.

Meanwhile, Director of Sport attached to the Ministry of Education, Department of Culture, Youth and Sport, Christopher Jones said aside from showcasing Guyana, the activity also provided the opportunity to interact with the residents, especially the youths due to the country’s participation in the Commonwealth Games 2018.

“I think our local athletes had the opportunity to touch the Queen’s Baton as well and Guyana as we know will be part of those games but all in all I think the two-day activity in Guyana was tremendous and of course the exposure to the world, we will see the fruits of those in the months and years to come,” the Director of Sport noted.

The relay is a tradition that celebrates the Commonwealth’s diversity, inspires community pride and excites people about sports and culture. It is believed that the Queen’s Baton carries a message from Her Majesty Queen Elizabeth II that calls on the Commonwealth’s athletes to come together in peaceful and friendly competition

The Queen’s Baton was designed in Australia to represent the people, the place and the spirit of the Gold Coast city, hence the loop design. It captures the energy that the people feel exists there. It is slated to depart Guyana and travel through several countries before ending its journey in the Falkland Islands.

The GC2018 Queen’s Baton Relay began at Buckingham Palace on March 13, 2017 and is set to travel for 388 days, spending time in every nation and territory of the Commonwealth until its arrival on the Gold Coast for the opening ceremony of the games on the April 04, 2018. 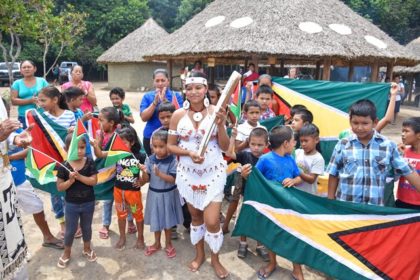 The youths of Surama posing with the Gold Coast 2018 Queen’s Baton. 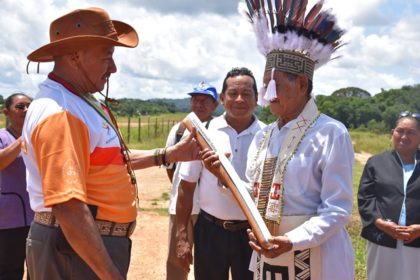