Officers of the Guyana Defence Force (GDF) today graduated from the Senior Command and Staff Course Number Fourteen at Base Camp Stephenson, Timehri. The officers are now equipped to command Units and Sub-Units and perform Staff duties at senior levels in the GDF.

The 16-week course covered areas such as Military law, Command and Leadership, Intelligence and Security and Peace Operations along with other related military modules. Each officer was required to prepare, present and defend a research paper as a requirement for graduation. 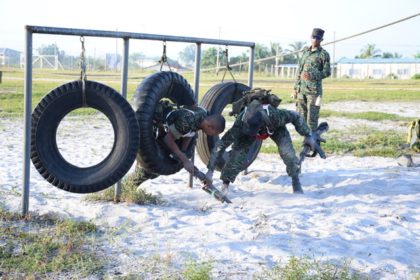 The officers also participated in a two day run and shoot in nine military areas, five kilometers run assault obstacle course, fall and shoot course and grenade throw. Officers that successfully completed the course received certificates while awards were given to those who excelled in a specific area.

Chief of Staff, Brigadier General, Mark Phillips delivering the feature address, congratulated the officers for their performances during the course. He noted that the officers received short notice about the training but they were placed in an enabling environment to complete the couse..

“From the feedback I received form this course, I am happy that the modules were delivered in a robust manner and that generally as students, you took advantage of what was presented,” the Chief of Staff said.

Brigadier Philips pointed out that the officers are completing the course at a time when traditional threats to Guyana’s national security have again raised their ugly head. He said, these threats, forces Guyana like any other country, to formulate plans to deal with the new and emerging threats.

“Illicit trafficking, you know of environmental degradation, you know of emerging threats like climate change and its effects on low lying states like Guyana and of course the dangers posed by terrorism,” are some of the dangers  Guyana faces, Philips explained. 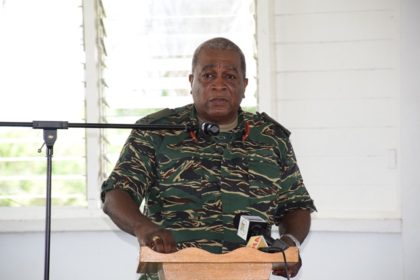 According to the Chief of Staff, such threats will continue to shape the format of the GDF and civilian military relationships.

Additionally, Philips noted that the GDF needs to be more involved not only with defense to territorial security but also public security and national buildings. These include safeguarding diplomacy, development and democracy.

The graduating officers were urged to develop the capacity to understand the complex socioeconomic and social political issues that affect the Guyanese society. “You must be able to satisfy and lead you subordinates at a higher level, at an intellectual level, at a level of leadership,” the Chief of Staff told the officers.

Philips who will soon be retiring said that, such practices will create the positive environment that our soldiers and our societal stakeholders will need to interact with the GDF on a daily basis.

On Monday October 3, 2016 there will be a Change of Command Parade for the outgoing Chief of Staff, Brigadier General Mark Phillips and incoming Chief of Staff Colonel George Lewis. The event will be held on the play field in Base Camp Ayanganna. Georgetown.