GECOM establishes procedures for handling of issues during recount

Government Commissioner, Charles Corbin, has reiterated the Guyana Elections Commission, (GECOM’s) readiness for the recount of ballots from the March 2nd 2020, Regional and General Elections.

GECOM on Saturday met with representatives from political parties who contested the elections, to iron out any concerns or issues they may have had.

Responding to questions from the local media, following the meeting, Corbin said most of the issues raised by party representatives had already been considered by GECOM, and pronouncements were made, with only a few to be straightened out. 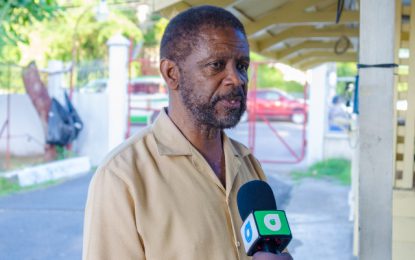 He stated that while GECOM took no pre-determined position on any matter, the body has put measures in place to deal with any hiccup. It has established a “Problem Resolution Procedure” which must be followed.

Explaining the procedure, Corbin said “If a problem arose with a counting staff and the party representative during the count, the counting staff is to report to the District Supervisor, but if the matter could not be resolved, then the Chief Elections Officer will be approached. And if the matter still could not be resolved at that level, then it will be taken to the Commission itself.

Corbin said once this happens, and the Commission makes an intervention and pronouncement, it will be final.

“We have established appropriate procedures for the handling of any issue that arises,” he reiterated.

Corbin said GECOM anticipates one particular issue that may come up, has to do with its six-digit stamp. “We anticipate that is likely to come up and we will make a determination on that when we see it in reality.”

Following the election, Corbin said GECOM received reports that the six-digit stamp in a number of instances was defective (and) may (have) impacted the stamping of the ballot.

In the meantime, responding to questions about likely stuffed ballot boxes and valid or invalid votes, Corbin said the commission had very early on determined what it would look at during the process of the recount.

“Everything that is observed will be documented to the extent that there will be a report that will come to the commission after that and depending on the evaluation of that report, the commission will decide how to treat a particular issue,” Corbin explained.

By Sunday latest, GECOM hopes to complete every aspect of its preparedness in anticipation for the Order to be gazetted, signalling the beginning of the recount of ballots.