‘GECOM has no intention of disenfranchising anyone’ – Commissioner Alexander

– “There will be no deletion of names, but the names will be highlighted on the eventual voters’ list”

Government-appointed Commissioner of the Guyana Elections Commission (GECOM), Vincent Alexander said everything is being done to contact the tens of thousands of persons who are yet to uplift their Identification (ID) cards from the 2008 House-to-House Registration.

The GECOM commissioner said the elections body had previously attempted to contact those persons, and will again do so through home visits, letters and other means. He explained that if that process yields little or no results, a decision will still have to be made on the next step.

Speaking to the media following a commission meeting on Tuesday, Alexander noted that the entity has no intention of disenfranchising anyone but wants to verify their whereabouts.

“We are using the ID card issue to determine the presence of our voters, their presence, their existence. The issue is not the ID card, the issue is that these persons, since 2008 and beyond, have not in any way presented themselves to be known, to be alive, to be existing, to be resident and the calling them, writing to them gives us the opportunity to make a determination in the context of an objection to say where are they,” Alexander told the media operatives.

The verification exercise, Commissioner Alexander explained, will provide persons with the opportunity to “let us know… We are not denying them an opportunity, we have already on two occasions sought to find these persons by physical visits to the places they were registered and by registered mail.”

“Persons will be alerted with the consequences of being known. We are trying to go through the process of verification. We are seeking to have a fulsome verification. We exercise our minds and judgement in the matter, and there is a final place of judgement if the need arises,” he told journalists.

Commissioner Alexander dismissed claims by the opposition that it will use the process as a delaying tactic. According to him, all processes will be concluded within the timeframe for elections on March 2, 2020.

Meanwhile, a decision is also pending on the invitation by GECOM, to electors who did not participate in the House-to-House exercise, and whose names are on the Preliminary List of Electors (PLE) to come forward and do a verification. He said if this is not done, their names could be highlighted on the Official List of Electors (OLE).

“There will be no deletion of names, but the names will be highlighted on the eventual voters’ list. The highlighted names will allow persons to vote. All it means is that awareness is being created of people whose whereabouts are unknown,” he explained. 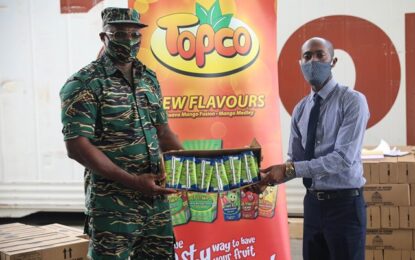 DDL DONATES 34,000 CASES OF JUICE TO THE CIVIL DEFENSE COMMISSION,...

Screening and testing point for COVID-19...