The Guyana Elections Commission (GECOM) and the PPP were back in court today after a contempt of court proceedings charge was brought by the Opposition against the GECOM and Region Four Returning officer, Clairmont Mingo.

Representatives from both parties were referred to mediation at the High Court by Chief Justice (ag) Roxane George, to flesh out issues surrounding the tabulation of District 4 results of the March 01 General and Regional Elections. 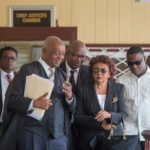 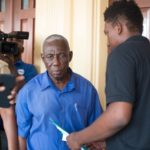 After no progress was made during the process, the Chief Justice sought to provide guidance and insisted that the SOP’s must be displayed during the tabulation process of the Region Four results.

The CJ explained that the process must continue, stating, ‘Let’s get on with it, the nation awaits.’ She added that the Returning Officer can use whatever method he deems fit and he can decide who he wants to observe the process in keeping with the law.

Speaking to media operatives before the mediation process, GECOM’s Attorney, Senior Counsel Neil Boston said that Commission is in full compliance with the Chief Justice’s order and accused the PPP of prolonging the process.

“Mr. Keith Lowenfield [Chief Elections Officer] has computed the votes and he as it on a spreadsheet. Now he is using the spreadsheet, he is calling numbers and now he is putting on screen the numbers as well as SOPs to reflect that…what is going on there is full compliance with the order of the Chief Justice…”

GECOM’s Chairperson, Retired Justice Claudette Singh reiterated that if there are discrepancies, there could be recounts.

The process resumed this afternoon at 4 pm at the GECOM Headquarters since the required scanner is available at the Commission’s head office. This in keeping with the decision to have the remaining SOPs scanned and projected on a screen for the Region Four tabulation exercise.