Women footballers across the country are being provided with a platform to play and develop their skills through the Always National Women’s Development League.

This league is a collaboration among the Guyana Football Federation (GFF), ANSA McAL and the Ministry of Indigenous Peoples’ Affairs. 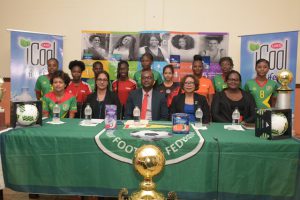 [From left to right] Women’s National Footballer, Lakeisha Pearson, Head of the Business Unit of ANSA McAL, Padma Kunjbeharry, President of the Guyana Football Federation, Wayne Forde, Minister within the Ministry of Indigenous Peoples’ Affairs and Patron of women’s football in Guyana, Valerie Garrido-Lowe and President of Women’s Football Association, Andrea Johnson flanked by some of the female footballers who will be participating in the league.

The tournament will feature 49 teams and see a total of 216 matches being played countrywide, with teams from every administrative region. Matches will be played in Berbice, Linden, Bartica, Essequibo, Moruca, Mahdia and the Rupununi. It will run from October 27 to March 2019.

President of the GFF, Wayne Forde said it is a fact that the Women’s National Team has achieved a lot more success on the international stage when compared to the men. Forde noted that all women must be given an equal opportunity to play the sport as this is a mandate of the GFF.

“This league will create a social messaging platform that I hope will allow us to speak to the issues that affect girls and women, but more importantly, open up new and fresh dialogue that will lead to solutions.”

The president said that $10.5M is being plugged into the tournament and that due to the remoteness of some regions, if a meaningful investment was not made, it would be impossible for some to participate.

Minister within the Ministry of Indigenous Peoples’ Affairs and Patron of women’s football in Guyana, Valerie Garrido-Lowe commended the initiative. She said that together with the GFF, the aim is to develop women’s football in the hinterland regions.

She pointed out that with the exception of Mahdia, women’s football in Region Eight had been left behind. However, now that the tournament is being kicked off everyone will have the opportunity to showcase their talent.

Senior National Player, Lakeisha Pearson, who will also be participating in the tournament, expressed her appreciation to the GFF and others involved for giving women the same opportunity as the men to participate in a major local tournament.

“When we speak about female football we hear development, so it is comforting to see the progress women’s football has made in Guyana and the length that we go to ensure that there is continued development. The players are extremely grateful for the opportunity to showcase and develop their talent in the wonderful sport. So, we look forward to a great league and we welcome this with open arms” Pearson stated.

Head of the Business Unit of ANSA McAL, Padma Kunjbeharry said that the company is always happy to be part of the development of sports in Guyana. Acknowledging that International Day of the Girl Child was observed on Thursday, Kunjbeharry said the launching comes at an appropriate time when women are being increasingly recognised.