A team from the Guyana Geology and Mines Commission (GGMC) will begin an investigation into reported pollution of the Waini and Barama Rivers later this month.

Minister of Natural Resources Raphael Trotman gave this assurance to residents of the Moruca, Region One Sub-District on Saturday, during a public meeting. Minister Trotman, along with Minister within the Ministry Simona Broomes, and a team met with Moruca residents at the Santa Rosa Secondary School. 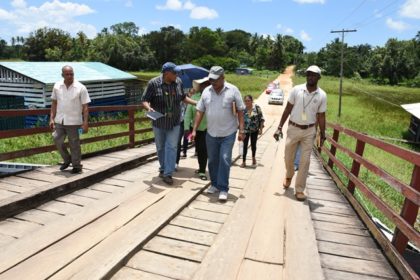 The Ministers told the residents that the visit was part of government’s efforts to meet with residents of communities to listen to their concerns and issues “so we can better serve you.”

Santa Rosa and Islands, Village Councillor, Graham Atkinson, raised the pollution concerns. He noted that many of the Amerindian communities in the area are dependent on the rivers, particularly the Waini River for its supply of fresh water fish.

Atkinson noted that mining in the upper Barama River has seen excessive sediment being released into the river which runs into the Waini. He also suggested random water quality testing be conducted by the regulatory agencies as part of their monitoring.

Meanwhile, several other village councillors raised concerns about the mistreatment of Amerindians who are employed in the mining and logging sectors in the region. Kamwatta Village Councillor, Camilla Frances told the Natural Resources Ministers that a “lot of injustice is taking place.”

Frances explained how miners from outside the region are seeking employees from the communities in Moruca, but then would mistreat them and not pay them in many instances. The treatment of workers in the mining and logging sectors in the region was also echoed by Senior Village Councillor of Mora, Aloysius Daniels and Toshao of Santa Rosa, Sherwin Abrams. 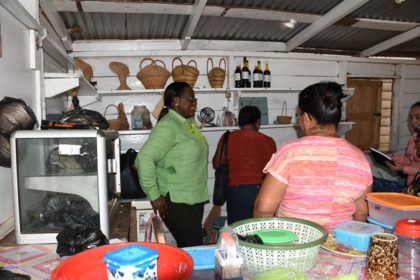 Minister in the Ministry of Natural Resources, Simona Broomes meeting with the women’s group of Moruca, Region One in their craft shop

Toshao Abrams lamented the fact that the miners and loggers seeking workers in the Moruca communities do not “present themselves to the village council.” Often times, Abrams explained, these people would send boat captains or others from the community to recruit workers.

Abrams said many of the workers are exploited and not paid for their services. However, the problem arises when these workers are unable to identify who they worked for. “It’s a common thing in Santa Rosa,” Toshao Abrams told the Ministers.

Abrams called for ‘drastic action from the level of the ministers.’ “People use to override Amerindians previously and we won’t have that anymore,” Abrams asserted.

Addressing these concerns, Minister Broomes told the councillors and Toshao that the Ministry has received several similar complaints of exploitation of workers by miners. “I want to make the point clear that not only are we aware of it, but we will address it. I want you to be assured,” the Minister said.

She also encouraged the residents to ensure that their relatives who work in the interior, “get all the information of the person” they will be working for. 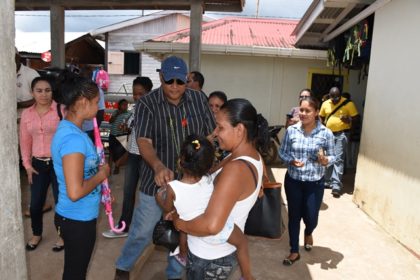 Minister of Natural Resources, Raphael Trotman meeting with residents of Moruca, Region One

Minister Broomes reminded the residents that the Ministry of Social Protection’s Labour Division has lead responsibility in labour issues, but assured her Ministry would also assist anyone who brings a complaint. “We can’t provide much help without names. Start this awareness among yourselves…as much information you can get, will really help too,” Broomes encouraged.

Residents praised Minister Broomes for her work in Moruca to curb TIP, but pointed out that more awareness in the region is needed. Minister Broomes said that she was pleased with the level of awareness within the region and pledged her continued support to eliminating this scourge. “Personally, anything I can do I will volunteer my time,” said the Minister.

Minister Trotman meanwhile pledged to leave contact information of officials and agencies with the village Toshao so that persons have a channel to raise any concerns.