Cattle farmers along the Berbice River and in the Intermediate Savannahs are to benefit from the acquisition of a cattle barge to be procured by the Guyana Livestock Development Authority (GLDA).

According to Dr. Dwight Walrond, Deputy Chief Executive Officer, GLDA, the barge for which tenders are currently being invited, will bring relief to the livestock authority and private livestock farmers alike.

“When you look at the cost to transport one animal to the station or from the station to the road, I think this barge would assist us greatly (and) the farmers in the Berbice River and the intermediate savannahs, those livestock farmers to be specific.” Waldron said.

The acquisition of the barge, which is being tendered for currently, is part of the GLDA’s budgeted $50M capital programme for the current year. The Deputy Chief Executive Officer told the Government Information Agency (GINA) that , “This is in keeping with the revamping of the Ebini Research Station which begun last year.”

As part of the GLDA’s efforts to revamp the Ebini Research Station, major works started last year with the guest houses being rehabilitated. Other works are also being done “We are focusing on pasture and other capital works and corrals for the pens for the cattle areas,” Waldrond said, 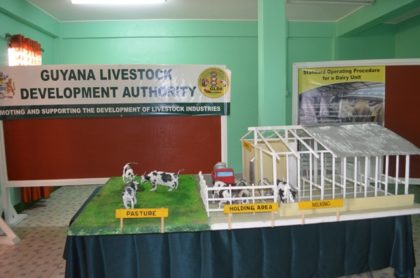 The  capital works include the acquisition of a bus equipped to aid in the Livestock Development Authority’s extension services to farmers.

“Farmers would have complained in the past, and even with our own internal evaluation we realized the quality of service we were putting out there to farmers as extension is not one we were proud of. As such, we made a pitch to have a bus that is equipped fully to assist us with our extension. This bus is equipped with a projector, DVD player and generator so we can be out there with the farmers, use the farmer field school method and actually show (video) clips of what other farmers are doing whether within Guyana or in other countries,” Walrond explained .

Walrond added that, “Another one of the capital projects is the construction of a quarantine outpost. We have to strengthen our surveillance system so that will help us monitor animals and animal products moving in and out of Guyana.”

The authority has benefitted from collaboration with the Pan American Health Organisation (PAHO), the Food and Agriculture Organisation (FAO) and Inter-American Institute for Cooperation on Agriculture (IICA) for training and facilitating certain processes.

The government has stated their intentions to not only diversify, but to also extend the agricultural sector away from the flood prone low coastal plains inland to the intermediate Savannahs. The GLDA and other agriculture agencies have been focusing on the acquisition of resources to facilitate and aid in this initative.