―traces Guyana’s journey to becoming a republic and beyond

An exhibition highlighting Guyana’s journey to Republican status was opened today at the National Museum.

The Republic Golden Jubilee Exhibition, featured several artifacts such as the first Mace used in Parliament while the country was still a British colony. Several replica stamps commissioned after Guyana became a republic were also showcased. 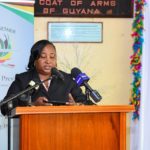 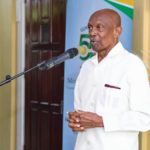 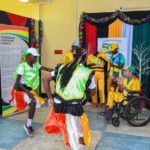 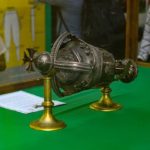 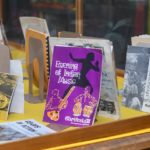 Some of the publications on display at the Republic Golden Jubilee Exhibition. 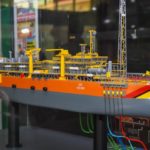 A replica of the Liza Destiny.

Copies of Kaie, Arrow and a special 1973 Mashramani booklet were among a number of publications exhibited. Numerous screens displaying information on the education system after Guyana became a republic, re-organisation of the government structure after February 23 1970, what becoming a Co-operative nation meant; institutions created after gaining republican status and the history of the Mashramani festival.

Performances by the National Steel Orchestra, Calypsonian Neheeryah Newland and a demonstration by a masquerade band with ‘flouncers’, flautist and drummers added a special touch to the event.

Director of Culture Tamika Boatswain told the gathering at the launch, the show seeks to reflect on the history of the republic to look at the Mashramani celebrations and its relationship to the republic and now 50 years later how Guyana is being transformed by oil,” she explained

Also present was Former Mayor of Georgetown Hamilton Greene, who noted that Guyana Jubilee celebration is a time for reflection and introspection – of the journey to independence and then plans moving forward to ensure the citizens were the beneficiaries of the country’s wealth.

Also present at the opening ceremony were the Minister within Ministry of Social Protection the Hon. Keith Scott, Speaker of the National Assembly Dr. Barton Scotland, members of the diplomatic corps and students.

The exhibition runs until March 18.