On Friday, February 21, 2020, His Excellency Dr. Riyad Insanally, CCH, Permanent Representative of the Co-operative Republic of Guyana to the Organization of American States (OAS) donated two (2) pieces of artwork to the OAS’ Art Museum of the Americas.

The two pieces, a painting entitled “Timehri Story” and a sculpture entitled “Slave Stock and Whip” done by renowned Guyanese artists Dudley Charles and Stanley Greaves, respectively, are the first-ever donations of work done by Guyanese artists that has been made to the permanent collection of the Art Museum of the Americas, and forms part of the activities to mark the observation of Guyana’s Republic Golden Jubilee celebrations and also coincides with Guyana’s Chairmanship of the OAS Permanent Council and Inter-American Council for Integral Development (CIDI). 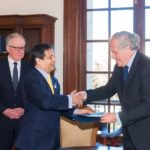 Ambassador Insanally and OAS Secretary General Luis Almagro celebrate after the donation of two pieces of artwork to the OAS’s Art Museum of the Americas (AMA). 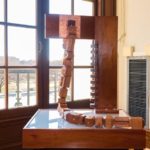 A sculpture by Stanley Greaves entitled “Slave Stock and Whip”. 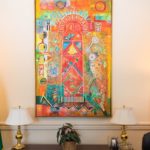 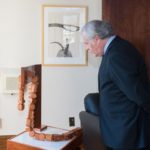 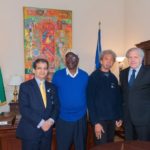 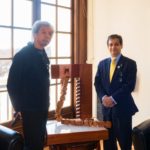 In the presence of OAS Secretary General Luis Almagro, Assistant Secretary-General Nestor Mendez, current Chair of the CARICOM Caucus of Ambassadors in Washington, D.C. and Permanent Representative of Barbados to the OAS, Ambassador Noel Lynch and Diplomatic Representatives from OAS member states, Ambassador Insanally remarked that he was very proud to donate the two works on behalf of the Government of Guyana, and was especially proud to do so in the presence of the artists themselves.

The pieces of art will be displayed at the OAS Headquarters during Guyana’s chairmanship of the Permanent Council, before being permanently placed in the permanent collection at the Art Museum of the Americas.