Though not currently a critical issue for Guyana, the Government has begun taking preventative steps to tackle the threat of land degradation and desertification through the Guyana Lands and Surveys Commission (GLSC), which commenced a Land Degradation Neutrality Target Setting workshop, earlier today at the Pegasus Hotel. Minister of State, Mr. Joseph Harmon has pledged that the Government will give every recommendation coming out of the workshops serious consideration as the country continues to forge ahead with its ‘green’ agenda to combat climate change and its effects.

The workshop, the first of three to be held, has as part of its intended outputs, the development of a Land Degradation Neutrality Programme (LDNP) for Guyana. The workshop will also determine the scope, implementation mechanisms and financial arrangements associated with the development of a country work programme as well as the creation of public awareness programmes.

Minister Harmon, who is the National Political Focal Point in Guyana for the United Nations Convention to Combat Desertification (UNCCD), delivering the feature address at the opening ceremony this morning, said that while the country is fortunate that land degradation is not in the critical advanced stage, as in many other countries, the opportunity has presented itself for Guyana to pursue a preventative and proactive programme instead of a treatment approach.

According to the GLSC, land degradation is characterised by the reduction and loss of the biological and economic productive capacity of land. It is a global phenomenon, with often-immediate detrimental impacts at the local level, caused by human activities and exacerbated by natural processes such as climate change.

“We are aware of such occurrences as improper farming practices; improper mining practices and salt-water intrusion that all contribute to the reduction and loss of land productivity and quality. The establishment of a land degradation neutrality programme for Guyana under the auspices of the Global Mechanism of the United Nation Convention to Combat Desertification is, therefore, most welcomed,” Minister Harmon said.

He noted that the issue represents one of the biggest environmental challenges in the world currently and Guyana takes seriously, its responsibility to the international community as a country located at the centre of the Guiana Shield. Guyana’s commitment to the preservation and promotion of a healthy global environment was first demonstrated in 1989 with the establishment of Iwokrama International Centre for Rainforest Conservation, in collaboration with the Commonwealth. Subsequently Guyana ratified the United Nations Convention to Combat Desertification in September 1997 and since that time the country has been actively involved internationally in matters related to the protection of the environment.

Minister Harmon said that the country will continue to subscribe to initiatives and actions, which protect the earth and mitigate the effects of climate change. Among these are the setting aside of the protected areas, which now stands at 1,792,055 hectares with a further two million hectares of waterways and land spread throughout the ten administrative regions to be added in the near future.

“It has been reported that erosion has reduced the productivity of almost one third of available farmland globally, that a quarter of the planet’s land surface has degraded, that 24 billion tonnes of fertile farm land is lost per year, affecting approximately one and a half billion people in 168 countries. Land Degradation is, therefore, a global problem that affects everyone on our planet. Along with our international commitments to a healthy global environment, the Government of Guyana has recognised that the pursuit of a ‘green’ agenda and economy is the best way to promote sustainable development, economic prosperity, environmental security and social well-being, a good life, for our people. In this regard, sustainable land management and development including issues relating to land degradation are of vital importance,” the Minister of State said.

Minister Harmon said that even as Government has begun to take tangible steps in the pursuit of a ‘green’ economy, the workshop, which is the beginning of the process to develop a programme for land degradation neutrality in Guyana, is therefore another important step in support of the establishment of its ‘green’ economy and agenda. “We are, therefore, grateful for opportunities such as these to ensure that we establish programmes to guarantee sustainable use of our land and not only promote land degradation neutrality but land amelioration as well. I would like to assure all concerned that even though the Land Degradation Neutrality targets when set would be on a voluntary basis, the Government of Guyana will view and treat those targets with utmost seriousness,” he said.

Meanwhile, Commissioner of the GLSC, Mr. Trevor Benn said that the Commission, along with being responsible for the guardianship of all public lands in Guyana, is also the focal point agency for the UNCCD. As a result, the Commission is required to provide an enabling environment for Land Degradation Neutrality to flourish. Towards this end, the Commission will be seeking to strengthen relevant existing laws and to recommend the creation of new ones where they do not exist. This, together with the implementation of the National Action Plan to combat Land Degradation, will provide the Commission with the necessary tools, he said.

“This would provide the country framework for a timely monitoring, management and reporting on land degradation, land reclamation and sustainable land management. This project is one of the several supported by the UNCCD and will in the creation of the Country work plan, a country analysis of the UNCCD implementation enabling environment, a report presenting the LDN baseline (land cover, productivity and carbon stocks) and the proposed LDN targets and associated measures and synthesis report summarizing the national LDN target setting process,” he said.

Mr. Benn said that land degradation issues in Guyana include the incidence of floods, droughts and salt-water intrusion in agricultural areas and natural resource utilisation in the mining, forestry and agriculture sectors. He noted that the extent and severity of land degradation worldwide combined with the negative effects of climate change, population growth and an ever-increasing demand for natural resources require immediate and assertive action and this is Guyana leading the way.

“It is the UNCCD’s vision to support the development and implementation of national and regional policies, programmes and measures to prevent, control and reverse desertification and land degradation and mitigate the effects of drought. Guyana is endowed with natural resources that include fertile agricultural lands, diversified mineral deposits and an abundance of tropical rain forests. This endowment is, however, threatened by a progressive pattern of land degradation that will in the long term curtail ecosystems services and functions if left unaddressed. With the recognition that Guyana could be affected by land degradation, the country ratified the Convention,” he said. 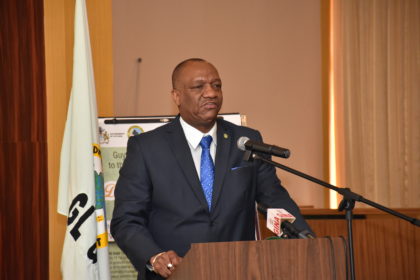 Minister of State, Mr. Joseph Harmon addressing the participants of the workshop 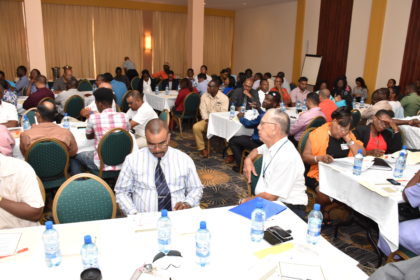 A section of the participants 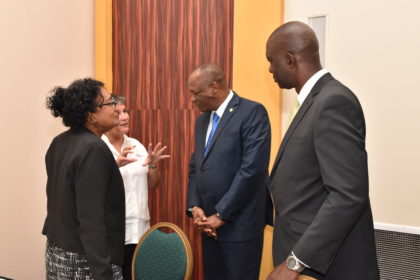