The government in collaboration with Inter-American Development Bank, (IDB), is training interviewers to build their capacity in preparation for the National Labour Force Survey to be conducted in July. 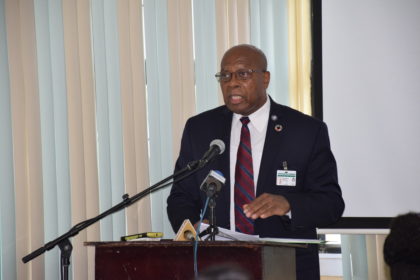 Finance Secretary, Ministry of Finance, Dr. Hector Butts delivering remarks at the launch of the training at the Bureau of Statistics

The training was today, launched at the Bureau of Statistics’ (BOS) new headquarters, Main Street, in the presence of Finance Secretary, Ministry of Finance, Dr. Hector Butts, Project Coordinator IDB/BOS, Jennifer Bentick, Chief Statistician, Lennox Benjamin and other representatives from the Ministry of Finance and the BOS.

Dr.  Butts explained to the gathering that the government, since its assumption to office in 2015 intended for policy framework and decision-making to be driven by the most current and relevant data available. However, the government had recognised that adequate and quality data in the labour force was lacking and took steps to ensure the correction of such shortfalls.

Subsequently, the government through the Ministry of Finance partnered with the IDB for financial support for the BOS. This support is given through the contracting of a team of technical experts from IDB, and will strengthen the institution’s capacity in the design, planning and execution of a nationwide labour force survey through this training.

“The principle and ultimate objective being that with the new enhanced skills acquired, members of staff of the bureau, particularly the surveys division would be able in the future to manage a continuous survey programme of the labour force and other socio- economic survey to meet policy information needs of government,” Dr. Butts explained. 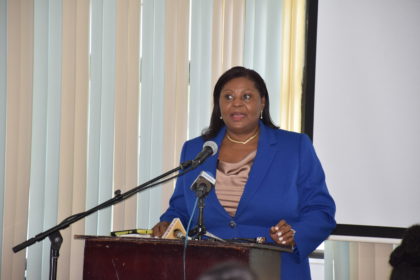 Chief of Operations, Inter-American Development Bank, Sharon Miller addressing the gathering at the launch of the training at the Bureau of Statistics

need to execute their sector survey, but do not have the capacity to do so.

The Labour Force Survey will run for a 12- month period commencing July 2017. It is subdivided into four continuous sub-rounds of three months each.

Chief Statistician Benjamin highlighted that some of the areas which the survey will be focusing on include key dimensions as the gender profiles and youth representation in the labour force, degree of under employment, the emergence of multiple job holders and senior citizens in the labour force among others. 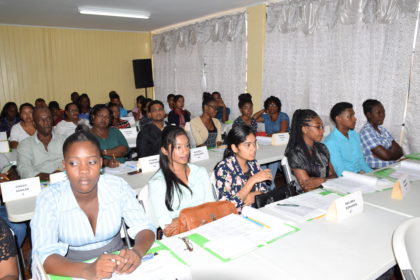 Meanwhile, Chief of Operations, IDB, Sharon Miller stressed the importance of collecting credible data not only on the coast, but also in the far flung areas. She noted that professionalism is key and urged interviewers not to be biased when conducting the surveys.

Miller told the gathering that, “It’s going to be important that you would capture the facts with a level of understanding and professionalism….You also have to know that there are no alternative facts, but to handle the information that you’re collecting with the level of professionalism, confidentiality and accuracy that it requires.”

The training is scheduled to last for two weeks. The first two rounds of the survey are financed by IDB for an estimated US$980,000; the other rounds will be funded by the government.