Minister within the Ministry Social Protection, Keith Scott said Government will not condone any local or foreign company breaching the laws of Guyana, nor will it interfere with the workings of the unions. The Minister today, met with executives of RUSAL -owned Bauxite Company of Guyana Incorporated (BCGI).

This meeting is part of the Ministry’s continued effort to engage employers, trade unions and stakeholders within the labour sector.

Minister Scott, who has responsibility for the Labour Department, told the Government Information Agency (GINA) that the intention is to ensure that both local and overseas companies understand the Constitution of Guyana and respect the labour laws.

The Minister said that the meeting was a success; however the company has some concerns with the current dispute with workers and the unions which have been ongoing since 2009. “We had a very frank and open discussion with each other. The team put the cards on the table and they have some concerns with the ongoing dispute…but what we did we put aside those areas that are very contentious and emotional and we discussed the principles in terms of respecting the Constitution of Guyana, the laws of Guyana and the trade union recognition that exist,” Minister Scott noted. 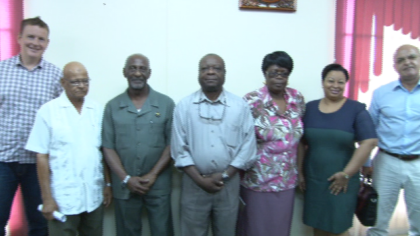 Minister in the Ministry of Social Protection with responsibilities for Labour Keith Scott meeting in discussion with representatives of Bauxite Company of Guyana Incorporated (BCGI) at his office this morning.

Minister Scott said that the Russian-owned company has indicated its willingness to facilitate trade unions. “Rusal has agreed to respect the laws of Guyana and to engage with the unions. They have also said that at no point since we have been meeting, that they have had correspondence from any union, but they are open to responding to any unions. They are also not against meeting with the unions to have negotiations on the way forward,” he explained.

While the company is cooperating with the Government of Guyana, Minister Scott said that it is important that it understands that trade unions are recognised in Guyana and that the constitution allows for persons to have the right to assemble and to be represented by a trade union body.

Tolpykin Igor, the company’s Human Resources Manager, explained that the company has been doing all in its power to ensure that workers are comfortable, and has ensured that they are paid above the minimum wage.

The Human Resources Manager said that the bauxite company is willing to facilitate trade unions and have amicable solutions to any issues affecting workers, and is also encouraging the Ministry to conduct inspections at any time.

In 2009, 57 workers who were engaged in strike action for increased wages and improved working conditions were dismissed by the company. The Guyana Bauxite and General Workers Union (GBGWU) spoke out against this action.

Earlier in the year, Minister Scott met with the company, and subsequently the GBGWU, since it is Government’s role to facilitate amicable discussions between unions and employers.